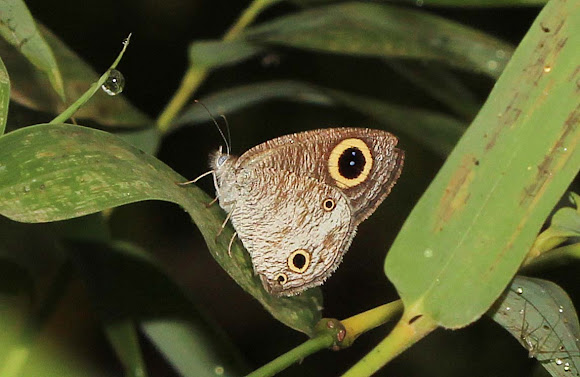 Nymphalidae; Satyrinae; Ypthima sempera sempera C. & R. Felder,1863. When I first came across the Common Three Ring (and the Common Five Ring which is not shown here), I became rather confused because I did not know how the rings were counted. Firstly, the rings are the eyespots (ocelli) - sorry if that seems rather obvious. Now how to count them. Look only at the rings on the underside of one hindwing. Then you should see two very small rings (often joined together) at the Tornus. They count as one ring. Then you count the other larger rings which are counted separately (joined together or not). If the total is three, then you are looking at a Common Three Ring. Don't be confused by the rings on the upper surfaces of the wings - the number of rings can vary.

This Common Three Ring was spotted at one end of a rice field which is not well drained and always retains some dampness even in the dry season. The picture was taken at the height of the dry season, but there were still some rice leaves growing in amongst other grasses and foliage on this neglected patch of rice land. This spot is also well shaded, by a nearby house and some Mango Trees. So it all adds up to a really good habitat for most Satyrines. Some of my other spottings of Satyrines were in this area.