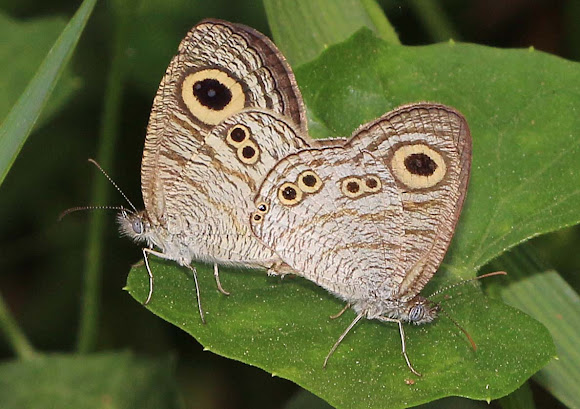 Nymphalidae; Satyrinae; Ypthima stellera stellera Eschscholtz 1821. When I first came across the Common Five Ring (and the Common Three Ring which is not shown here), I became rather confused because I did not know how the rings were counted. Firstly, the rings are the eyespots (ocelli) - sorry if that seems rather obvious. Now how to count them. Look only at the rings on the underside of one hindwing. Then you should see two very small rings (often joined together) at the Tornus. They count as one ring. Then you count the other larger rings which are counted separately (joined together or not). If the total is five, then you are looking at a Common Five Ring. Don't be confused by the rings on the upper surfaces of the wings - the number of spots can vary. There are some very nice pictures at: https://www.jungledragon.com/image/54059...

All of these Common Five Rings were spotted within a few feet of each other, in grasses and foliage growing wild in a rice field between rice planting seasons.

I want to mention the following: The three copulating pairs were the original subject of this spotting in that they were all close to each other at the same time and I thought this might demonstrate the strength of the local presence of this butterfly. I was about to upload my spotting when I remembered my confusion, years ago when I first saw a Common Five Ring and then a Common Three Ring. So I thought to add two individual shots (of Ypthima stellera stellera), one Dorsal and one Ventral so that I could explain the counting of the spots for any new enthusiasts. On checking back through my records, I had not taken any pictures of individuals on the day I saw the Copulating Couples, but I had taken several shots of individuals at that same place, but on a different date. So I included them to illustrate the counting of the rings. The two 'single' pictures are the same specimen to show dorsal and ventral perspectives.

Hi Brian38, Thank you for your kind comment. Although I have been interested in nature for some years, I am new to Project Noah and enjoying it immensely. My wife tells me that my notes are too long-winded, but its hard to break a lifetime habit. So thanks again. John B.