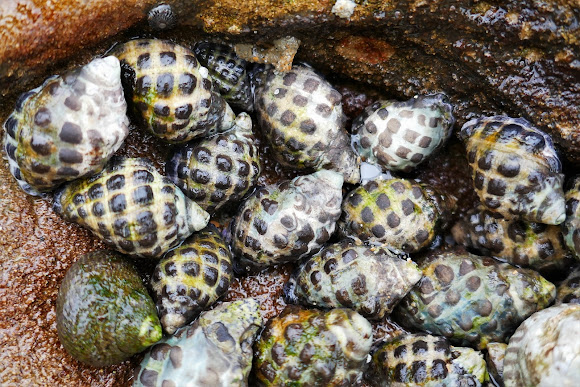 Morula marginalba, commonly known as "mulberry whelk", is a carnivorous species of sea snail, a marine gastropod mollusc in the family Muricidae, commonly referred to as "murexes" or "rock snails". It has a distinctive shell pattern with five spiral rows of nodules on body whorl, with a variable number of scaly ribs between. The shell is usually eroded, so this fine sculpture is normally not present. Size is usually less than 20 mm, but can grow up to 35 mm in length. This is a predatory species that feeds almost exclusively on molluscs and barnacles, and it's also found in estuaries where it is known as the "black oyster borer" because it feeds on oysters where it is regarded as a pest. It has an extensible rasping radula with which it drills a hole through it victim's shell. The process is believed to be assisted by the sulphuric acid it produces in its salivary glands which helps to soften and dissolve the calcium carbonate in the mollusc's shell. It then uses its radula to cut the soft body of its victim in pieces before sucking the semi-digested mass out. Nasty! PS: Not the best picture quality as rushed photos due to rising surf. I almost got drenched a couple of times, so this spotting was a hit-and-run.

This spotting was found on a rock platform at North Avoca Beach, on the NSW Central Coast. It is common on rocks in the intertidal zone where adults hide in cracks and rock pools. Range is around the north and east coasts of Australia.

Morula marginalba is often confused with an almost identical species - Morula granulata. The second reference link gives a good comparison of the two species. I've done an image search of both, and I guess to the untrained eye they look almost identical, because to me, they do! Morula granulata has a vast range in the Indo-Pacific region, and it does occur around northern Australia. In Queensland, it occurs on the outlying areas of the Great Barrier Reef, but I don't think the species ranges this far south.

Good luck with your sci-fi story. I might pass on the custard apple, but please send me some of your mangoes. Our season has ended here :( I promise to share some with the Jonathan's Two-fingered Sloth ;)

Yeah...Custard apple...it is really sweet once you get the squishy ripe ones...but full of seeds and only a teaspoon of edible pulp! So much effort. Sulphuric Acid ...eh! Thanks Neil you just gave me a great idea for a sci-fi story!

These aren't full of sugary goodness, Sukanya. More like sulphuric acid. Nasty. I've had custard apple, but I think it's the same fruit by a different common name? I don't recall it being overly sweet.

Reminds me of a fruit we have in India (and elsewhere too) Sugar-apple, or sweetsop, is the fruit of Annona squamosa.

:-) Thanks for the other link. That snail is like me. I clean up well, just not often :-) Have a great day. I guess it's already mostly over where you are. Oh well.

Possibly, or just a sleep-over after a big night? It looks pretty grubby, but here's a clean one - https://www.projectnoah.org/spottings/35...

A little family gathering, no doubt. The other is a wavy top periwinkle (Austrocochlea concamerata). I've never seen one covered in algae like that.

Nice Neil. I assumed someone had collected a bunch of them. I guess they congregate on their own. Is the green one in lower left the same as the rest? Blowing it up, the shell shape looks different. Thanks for sharing.