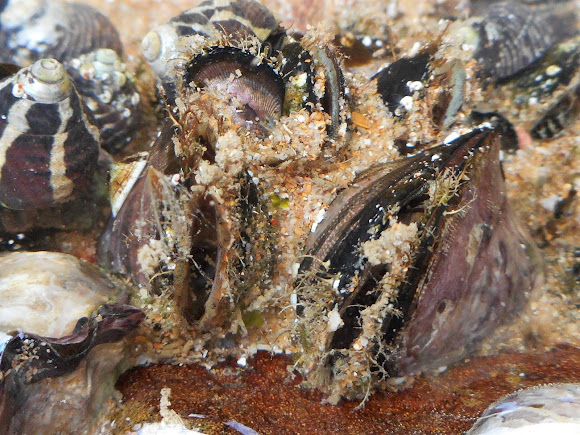 Trichomya is a monotypic genus of marine bivalve molluscs in the family Mytilidae, the mussels. The only species is Trichomya hirsuta which is endemic to southern and eastern Australia. Its common names include the hairy mussel, the greenling and the kelp greenling. (Wikipedia) PS: The third photo clearly shows plant-like filaments growing around the mouth of each mollusc. A species of 'opportunistic' algae perhaps, or are they part of the mollusc itself? I also had difficulty trying to match the radial lines that run longitudinally down the shell, whereas images I was seeing online showed shells without these radial lines, but with strong lateral growth rings instead. This was now a mystery, so I got in touch with the Australian Museum and asked for their assistance to help ID this spotting. I've posted their response in the notes section below.

This spotting was found in the ocean rock pools at North Avoca Beach in NSW, Australia. High seas had flushed these rock pools out and the water was clean and clear.

Dear Neil, thank you for your enquiry. You have found a cluster of Hairy Mussels (Trichomya hirsuta). I thought pipis at first as they are in sand rather than on hard substrate and pipis are burrowers, however the fine radial lines (striae) were a good indicator that they were mussels rather than pipis, as pipis do indeed generally only have the concentric growth lines rather than longitudinal striae (with some exceptions of course). Mussels attach themselves to hard substrate using byssal threads, hair-thin filaments that act as a glue. In this case the space between the hairy mussels has been filled with sand, which often happens in the intertidal zones where they are found. As to the filaments attached to the shells, they are part of the animal itself. Many bivalves have a waterproof, proteinaceous skin as the outermost layer of their shell, called a periostracum. It seals in any deposited calcium carbonate for shell formation, as well as adding durability. In the hairy mussel’s case, they can often completely cover their shell with the hairs to keep parasites off, and they also form a dense mat for other animals to use for habitat. The ones you have found have only a small amount of hairs covering them – likely only the most recent shell growth still has periostracum attached, with the rest being scraped off the older sections by abrasive sand and tidal motion. For more information on these mussels, please see here: https://bie.ala.org.au/species/urn:lsid:...