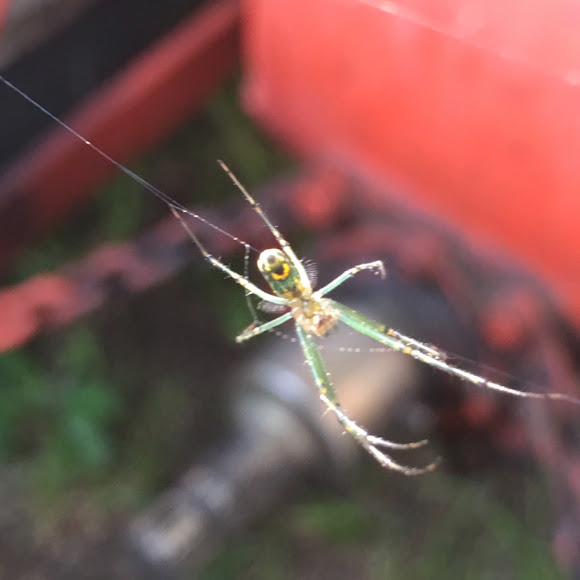 Body length (excluding legs) of adult female ranges from 11-22 mm; adult males range from 8-15 mm. Body length (excluding legs) of adult female ranges from 11-22 mm; adult males range from 8-15 mm. Female Primary Colors WhiteBlackPinkRedTanYellowGreenPurple Male Primary Colors WhiteBlackTanYellowGreen Eyes Like the majority of spiders, this species has a total of eight eyes. For all members of the family Oxyopidae in North America, the eye arrangement is fairly recognizable and hard to mistake. When viewed from the front, the anterior row (bottom row) consists of two very small eyes in the middle and then two larger anterior lateral eyes (though this seems like two separate rows, those four eyes are considered one row). The posterior eye row (top row) is slightly procurved and all four eyes are of roughly equal size. The exoskeleton between all the eyes is usually red, but is covered by short, white hairs. This draws attention to the somewhat hexagonal shape that the eyes form, which is one reason Green Lynx Spiders are typically easy to identify when using the eyes alone. Legs The legs of the Green Lynx Spider are long and relatively thin; longer in adult males than in females. They are covered in conspicuous black spines, and the femurs have many small black dots. In both genders, the legs are usually a translucent green color, with yellowish-orange rings at some of the joints. This species has the ability to change colors based on habitat, so the legs may be translucent reddish-pink in some specimens. The tarsi (tips of legs) have 3 claws each. Body The cephalothorax (front body segment) is relatively high in this species, which is especially visible from the front. Viewed from the top, it is pear-shaped and usually a bright green color, sometimes with scattered red or black spots. The abdomen (rear body segment) is relatively long and is rounded in the front and tapered to a point in the back near the spinnerets. The coloration and pattern can vary on the abdomen, often due to habitat or the age (instar) of the spider, but is typically also a bright green color (can be reddish-pink or purple in some individuals). Most specimens also have pairs of white and/or burgundy diagonal lines down the center of the abdomen, which point forward towards the “head” of the spider. The body shape is the same for both genders, however the adult males are much thinner than the females and also have longer legs in relation to their body.

Aside from the southern USA, this species is also found in Canada, Central America, the West Indies, and Venezuela.

Beautiful find! I believe this is actually an Orchard Orbweaver. Green Lynx spiders are much more hairy on the legs and do not build webs, they also have a slightly different shaped body and markings. Please compare here: http://bugguide.net/node/view/2032