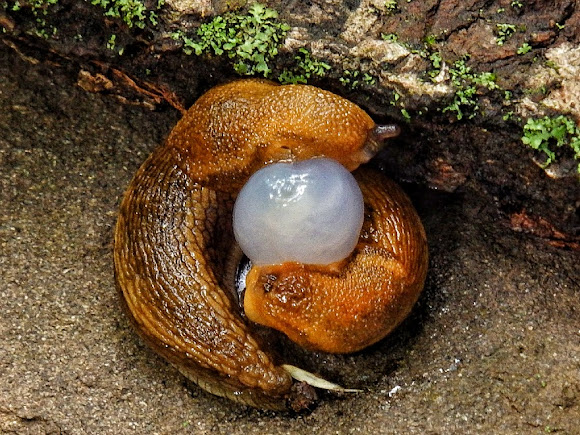 These slugs are native to the Old World, particularly to northern and western Europe. They were introduced to the northeastern United States early in US history, and since then have been introduced to California and are now naturalized across much of the eastern part of the country. They have become more common than native species in many areas, and are one of the most abundant slugs found in gardens, fields, and forests.

Like all slugs, those in the genus Arion are hermaphrodites (possessing both male and female sex organs). They can reproduce either by self- or cross-fertilization, depending upon conditions and habitat stability. When two slugs mate with each other, they each simultaneously play the role of both sexes, exchanging sperm with their male genitalia. At times, the male sex organs of two slugs become entangled during mating and the slugs may bite them off in order to free themselves, a not uncommon sacrifice known as ‘apophallation.’ From then onward, the apophallated slugs are only able to reproduce as females. Arion subfuscus mates in the mid-to-late summer. Several days after mating, slugs will lay hundreds of 3-4 mm eggs in the soil, and die shortly thereafter. Although there is no parental care in this species, the eggs are imbued with a caustive agent called miriamin that serves in a large part to protect them from predation. In around a month, the juveniles hatch as small, pale-brown versions of their adult selves. They typically take at least 4-6 months to achieve sexual maturity, mating and dying themselves before the new generation hatches from the eggs.

I got information from University of Virginia, Department of Biology. Here is more information: http://www.mlbs.virginia.edu/organism/ar...

Thank you so much Polilla. I really appreciate your kind comments.

Thank you very much Gilma. I appreciate your comment.

Great information. So very interesting. Thank you so much for sharing, RiekoS

Thank you very much for the explanation, DanielePralong. I am truly happy to be a part of the Project Noah. I have learned so much from this community.

Thank you so much for your kind comment, Neil. I truly appreciate it.

LaurenZarate, here is the video about Leopard slug mating. It is amazing!
https://vimeo.com/16731697

Thank you so much for your comment, Pradeep Kumar.

Thank you so much ChunXingWong. This was my first time witness this.

An amazing spotting. Love the photo, and great info too. Thanks for sharing, Rieko.

Very cool Rieko! I didn't know all that about slugs. What exactly is the white ball? Sperm?

This is one excellent wildlife phenomena you have captured here.
Well done on this amazing spotting!

Thank you very much Patrick. I truly appreciate it.