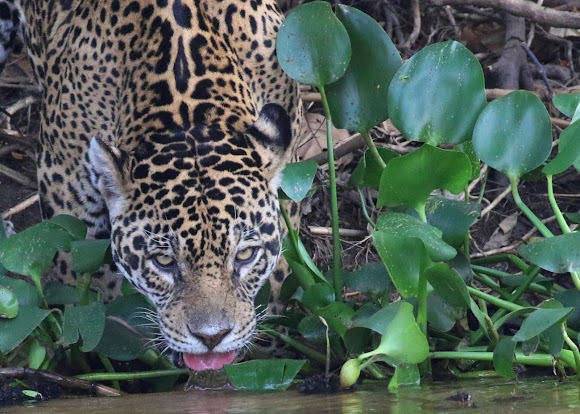 Third largest cat species after the Tiger and Lion. Males grow up to 100kg (220lbs) but have been recorded up to 150kgs (330lbs). On average females are 10-20% smaller. They usually have a tawny yellow base coat with large black rosettes and spots but colour morhpism is not uncommon which occurs at a rate of around 6% of a population producing black animals. Legs and tail are relatively short to body mass which are perfect for climbing, crawling through heavy forest and swimming.

Although quite wide spread through Central America and down into South America, this species has a Conservation Status of 'Near Threatened'. These animals were photographed in the Brazilian Pantanal on the river bank. Although usually solitary they were together and mated twice during observation.

This species is known for having the strongest bite relative to size of all the cats, (closely followed by the Clouded Leopard). They kill their prey in a number of ways but the most unusual thing about Jaguars is their ability of biting through turtle shells or through a prey victims skull. A reasonably sized male can have a bite force of over 500kgf (1110lbsf) at the point of the canine teeth! Ref: Wikipedia

My pleasure Leuba and thank you for the comment. Couldn't resist trying to take a picture of her dental assets!

That third shot is amazing -you would have to feel sorry for the victims ! But what gorgeous creatures. Thanks triggsturner.

Thank you Pajaro. Good luck with your search. It is so worth the time and energy when you find them.

Great!!!
I hope to see one of these soon ! it's my favorite feline

Thank you Polilla, was an awesome experience.

haha... and rightly so, Robert.

Thanks Mark, and thanks Pamsai. Watching these animals made my year Pam!

Congratulations... this sighting must have made your day !

Wow what a great set of pics. Congrats.

Thank you all for your positive and wonderful comments. Thank you PN for the SOTD - an honour, and thank you dcslaugh for your explanation of the name. Very interseting about the other species too.

Congrats on your SOTD. Lovely series!

The word "jaguar" comes from the Tupi-Guarini language family of South America. The bird "anhinga" and the flower genus "jacaranda" also have their origin from this language family.
https://en.wikipedia.org/wiki/Tupi%E2%80...

Congrats triggsturner, this awesome encounter has been chosen as Spotting of the Day!

What a fantastic series Robert!

Thank you Reza, I was stunned to see both these animals. A lifetime memory.