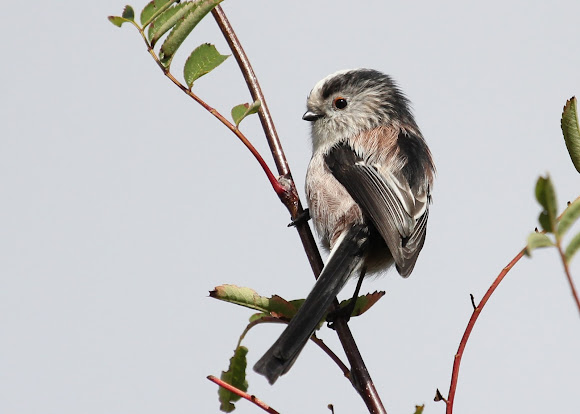 Small 'titmouse like' bird. 13-15 cm long including the tail (7-9cm). When flying it looks like a small ball pale ball with a tail. Breast and face white, with distinct pinkish tinge to the flanks and belly. Black band,from the forehead running alongside the crown to the nape. Back and tail black with a broad area of red brown across the shoulder. Also has a red orbital ring.

Found in mixed deciduous woodland with good undergrowth. Usually seen in family groups foraging or in a mixed flock of other tits and finches. This bird was found in the Northern Scotland where it is less common than the rest of Britain.

Although called a Tit, this species is actually more closely related to the group that includes warblers, swallows and larks. Ref: Collins Bird Guide to Britain and Europe.

Thank you Ashley and thank you Polilla for your comments.

Thank you Viv, thank you Reza. Know what you mean Viv, I always enjoy seeing them and they always make me smile.

I love the Long-tailed Tits. They are such cute little birds. We get small flocks visiting the garden in Devon. Beautiful images trigg

Thank you Jim. I appreciate the comment. Seasons greetings to you. Robert.