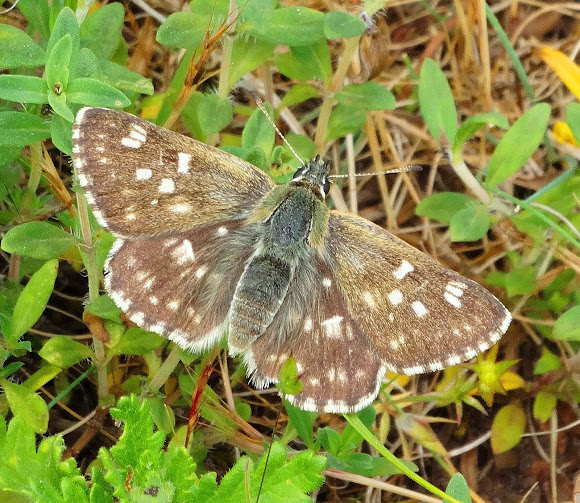 Female Tesselated Skipper (Muschampia tessellum). The Tessellated Skipper (Muschampia tessellum) is a butterfly of the Hesperiidae family. It is found from the southern Balkan Peninsula (Macedonia, Bulgaria, Greece and the European part of Turkey) through Ukraine, southern Russia (north to the Moscow region) and Asia Minor, southern Siberia, Mongolia, east to the Amur region. The length of the forewings is 13–16 mm, the wingspan is 32–36 mm. The upper wings are brown with numerous clear white spots on both fore- and hindwings. The underside of the wings are olive green with paler spots. Adults are on wing from the end of May to mid August in Europe. In the Altai mountains, adults are on wing from May to July. The larvae feed on Phlomis species, including Phlomis samia in Greece and Phlomis tuberosa in the southern Ural.

Spotted in a meadow of mount Chortiatis (Thessaloniki, Greece).