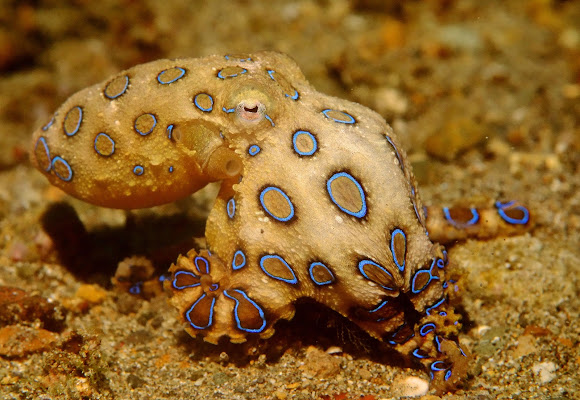 Came across this Blue-Ringed Octopus late in the afternoon when they are most likely coming out to hunt/feed. The pictures above shows it catching a crab (Pic#1) as its tentacles envelopes the crab giving the roundish and bulky look. Pics#2 & #3 were taken as it swam away, carrying the crab. When they are swimming, their body colour tends to change to yellowish/brown compared to whitish/grey as in Pic#1. The greater blue-ringed octopus is despite its vernacular name a small octopus whose size does not exceed 10 centimeters, arms included, for an average weight of 80 grams. Its common name comes from the relatively large size of its blue ring (7 to 8 millimeters in diameter), so they are indeed larger than those of the other members of the genus and help to distinguish them. The head is slightly flattened dorsoventrally and finished in a tip. Its height arms are short. The coloration of this octopus varies with the circumstances and the ambient environment from yellow ocher to light brown through whitish (when inactive). The blue rings are about 60, spread throughout the entire animal's coat. The rings are roughly circular and are based on a darker blotch than the background color of the coat. A black line, whose thickness can vary to increase the contrast and be more visible, borders the electric blue circles. The blue rings are an aposematic adornment whose purpose is to clearly show to all potential predators that this octopus is highly venomous.

The greater blue-ringed octopus is widespread throughout the tropical and subtropical waters of the Indo-West Pacific from Sri Lanka to the Philippines and from Australia to south Japan. The greater blue-ringed octopus likes shallow waters with mixed seabed (rubble, reefs, sandy areas ...). Like all octopuses, it lives in a burrow and only comes out to search for food or a mate. The entrance of the shelter is littered with legs from meals (empty shells and crab shell and legs) and it's quite easily identifiable.

Thanks, @JillBlack and @Sergio Monterio for your kind words and support.
Sergio, I am still an amateur photographer both on land and underwater, with simple set-ups. Serious Underwater Photography can get very very expensive :(

A very deserved SOTD, indeed, Albert. You are the master of underwater photography. Congrats.

Thanks, @Ashley for this SOTD :)

Thanks, PN friends for your kind comments and support.
@sunnyjosef, @Polilia, @Mark, @Kathleen, @triggsturner - truly appreciates that you guys like this one :)

@beaker98 - sometimes, its a lucky shot but also persistence and willingness to spend time to stay with the animal to observe their behaviour and anticipate a certain movement/reaction/changes. Like in the case of this Blue-Ringed Octopus, they don't display the bright blue rings continuously, it is more like flashing, and often time, you get just a faint thin blue-rings. But when they do get 'very agitated' they will flash a very thick blue-rings like shown in this Spotting (http://www.projectnoah.org/spottings/197...).

@SukanyaDatta - its so true, there are so many amazing Spottings and great pictures in Project Noah and the best part is the opportunity to learn additional information about them :)

@triggsturner - as I mentioned in my comments at FB, it is possible to see them even if you are not a scuba diver. They tends to like shallow waters and sometimes get trapped in tidal pools. If you have the opportunity, when in places like Malaysia, Philippines, Indonesia and even Australia, do look out for them during low tide, especially in the late afternoons.

Congratulations Albert on your SOTD!

Wonderful work Albert. Stunning images of a creature most of us never get to see in the wild. Congrats on your very well deserved SOTD.

Congratulations. I am speechless...but then, I often run out of words when I see the spottings on PN...the quality of the photographs, the incredible diversity of life on Earth and the knowledge that people have...I ran out of words again.

Love it Albert! Congratulations on SOTD!

Superb again Albert. Congrats and thanks.

Congrats Albert, this beautiful octopus has been chosen as Spotting of the Day!

Thanks Albert. Your setup reflects your skills very well! Thanks for providing details.

@beaker98 - I am using an old Sony RX100 compact camera in Patima Underwater Housing with 1 external strobe. This is a basic set-up as usually, more serious underwater photographers will use 2 external strobes for better lightings. For this series of pictures, I also have to use a diopter (Sub-see +5), which serves as a macro-lens as the Blue-Ringed Octopus is small, just around 5 cm in body size. The camera setting was 1/250 shutter speed at F8.0 (highest possible aperture setting for this camera, with ISO800.

I have added a 4th picture to this Spotting, showing the early part when the Octopus was 'attacking' the crab. The crab is the dark brown thing on the right with hairy algae stuff on its shell.

Thanks, @venusflytrap2000 for your kind words and support :)

Wonderful capture Albert. If you don't mind, what kind of camera setup do you use when photographing under water? Thanks.