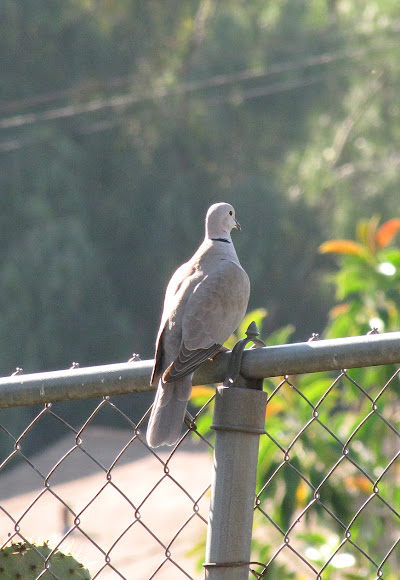 A pair of these birds surprised me this Spring, as I had never seen them in San Diego before. They are noticeably larger than Mourning Doves and have the obvious collar and also dramatic white patches in the tail.

Apparently these birds have been introduced and spread throughout the US and are happy in urban areas.

From the San Diego Bird Atlas -- http://map.sdsu.edu/group2007Spring/grou... "Introduced from the Old World to the Bahamas, the Collared Dove spread to Florida then across the entire width of North America in less than 20 years (Romagosa and McEneaney 1999). There have also been independent releases in the United States, establishing local populations, such as one in southern California in Ventura County in the early 1990s (Cole and McCaskie 2004). Sightings in San Diego County are likely the results of birds arriving from the east, as the number in Calipatria, Imperial County, had built to over 50 by 2003. The first Collared Dove in San Diego County was one at Marina View Park, Chula Vista (U10), 29 May 2002 (G. McCaskie). Subsequently, up to two were at the Roadrunner Club, Borrego Springs (F24), from 12 April 2003 onward (M. B. Mulrooney), and one was in the Mission Hills area of San Diego (R8/R9) 28 September 2003 (D. Dobson). Colonization is inevitable; the Collared Dove is an urban bird."