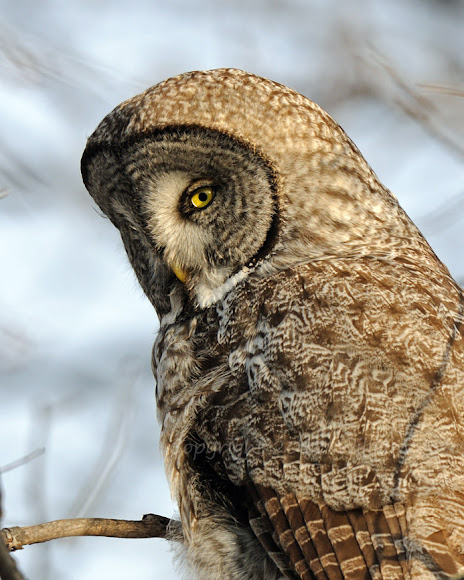 The Great Gray Owl is a very large owl, in appearance it is the largest Owl in North America. It has a round head without ear tufts, black and white "bowtie" under face and yellow eyes. Although in appearance it is larger then a Snowy Owl or a Great Horned Owl, it weighs quite a bit less then both these owls. This owl actually has a very small frame, and is covered with a massive amount of feathers.

This bird should be somewhere in the Boreal forests of northern Canada. He is however spending some time in a very populated town near Madison, Wisconsin.

This bird, has been attracting a lot of attention, as few people ever get to see an owl in the wild. People are coming from great distances to see, and watch this huge owl. Many people who would otherwise not even think twice about wildlife around them, seem to be quite taken by this bird. Many young children are getting to see this bird, and I have been told that several day care facilities near where this bird is being seen, have actually taken their young charges to see this bird. This bird has been seen since March 21st when a worker at a local establishment saw it sitting on a post and clicked a photograph of it and posted it to the business facebook page. He had no idea how rare this bird is for the location it is in. Since that time, hundreds if not thousands of people have flocked to see this owl. For many it very well could be the only owl they ever see in the wild in their life time. This bird is so unafraid of people that it spends most of its time in and around a bar, and apartment complex, it spent a day on a light fixture near the main entrance of a local restaurant, and even landed on the pole of a basketball hoop while 4 boys were having a basketball game.

Me too! They're Awesome birds!

It's the least I could do. This is definitely one of my top targets in North America!

Thank you so much for the kind words on my captures of this Great Gray. I am deeply honored that you would take the time to do so, Bhagya Herath, Jim Nelson, and JoshuaGSmith.

Incredible photos! I love the eyes.

I love owls...and would have traveled some distance to see it myself. I am going to have to make do with your photos, which by the way are very good!

out of words now....Great captures of the most beautiful birds in the world....

That look! I have heard that comment a lot from this capture. It is one of my favorite Great Gray Owl captures I have made. Thanks for sharing your thoughts, Lizzy and I am thrilled you enjoy my efforts to capture the beauty I see in my part of the world.

SteveWaldren I wish you success in your attempts to see this most amazing owl. I had never seen one in the wild until this past winter. I ended up actually seeing two different birds and was able to photograph both as well. Hope to see your captures of one of these here someday.

Thanks so much Chris P. I have dozens of owl captures, but this is one of my finest judging from the feedback I have gotten back both here and other places I have shown it.

Beautiful. I'd love to see this species. Have tried several times for it at Yosemite National Park but no luck yet.

Now if this isn't character, what is?!

Thanks LandmarkExpert. I may be mistaken, but I am not sure I ever got SOTD for this capture.

Thank you so very much Patty, and claudiadurand1999

Thank you so very much Mona Pirih

Another perfect portrait of a wild creature! Thanks for sharing it with us.

Petricecat, this is indeed one majestic, and beautiful owl. I have been blessed with seeing two of these in the wild this year, along with some other rare owls ( at least for my part of the world). I hope to post a few captures of a Boreal Owl, and a Northern Hawk Owl that I spotted very soon. If you ever have the chance to see one of these beautiful owls, you will be impressed with its sheer size, and its stunning beauty. This owl, should not be in my part of the world, but is here simply because it could not find enough food ( rodents primarily) where it normally lives.

and 103 other people favorited this spotting