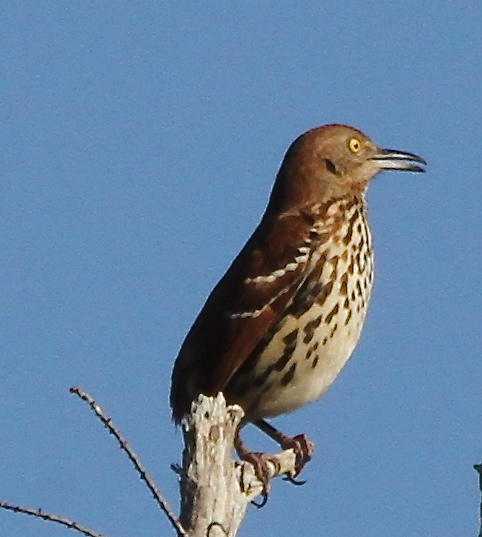 The Brown Thrasher (Toxostoma rufum) is a bird in the family Mimidae, which also includes the New World catbirds and mockingbirds. The dispersal of the Brown Thrasher is abundant throughout the eastern and central United States, southern and central Canada, and is the only thrasher to live primarily east of the Rockies and central Texas. It is the state bird of Georgia.(Wikipedia)

The Brown Thrasher resides in various habitats. It prefers to live in woodland edges, thickets and dense brush, often searching for food in dry leaves on the ground. It can also inhabit areas that are agricultural and near suburban areas, but is less likely to live near housing than other bird species. The Brown Thrasher often vies for habitat and potential nesting grounds with other birds, which is usually initiated by the males.[