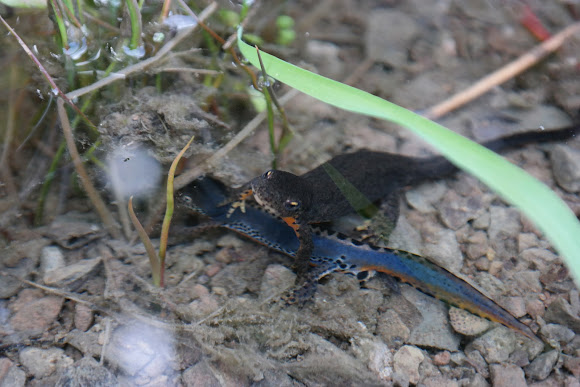 During the mating season early in the year, the males exhibit dark-blue colouring on their backs; their flanks have white-black-spotted stripes below sky-blue stripes, and their bellies are bright orange. The females, in water camouflage, are mottled brown and have some weak spotting on their backs. The biggest of the males can reach up to 9 cm, and the females up to 12 cm in length. After the mating season, they return their original color of mottled brown.

Alpine newts typically inhabit forests with good access to water in hilly to mountainous regions. They are mostly absent in forest-poor areas. They populate well in thick deciduous forests, as well as parkland and natural gardens. Outside the spawning season, Alpine newts live terrestrially. During the day it stays in all kinds of undergrowth, but during the mating season in cool water (forest pools, artificial pools). After the adults come out of winter dormancy, they migrate to their spawning pools.

Alpine newts were originally confined to Central Europe and mountainous Southern Europe, as well as an isolated area on the northern Iberian Peninsula. The species was introduced to southern England in the 1930s and several populations have become established as far north as Edinburgh.