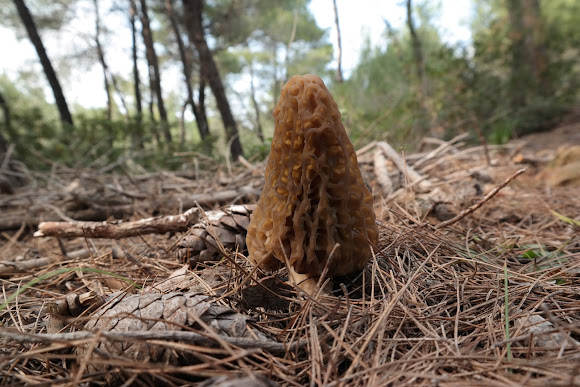 The fruit bodies of Morchella are highly polymorphic, varying in shape, color and size, while in many cases, they do not exhibit clear-cut dichotomous features microscopically; this has contributed to uncertainties regarding taxonomy. Discriminating between the various species is further complicated by uncertainty regarding which species are truly biologically distinct. Authors in the past had suggested that the genus only contains as few as 3 to 6 species, while others recognised over 50. Mushroom hunters mostly refer to them by their color (e.g., gray, yellow, black) as the species are very similar in appearance and can vary considerably within species and age of individual. The genus is currently undergoing extensive reevaluation with regards to the taxonomical status of many species.

Morchella, the true morels, is a genus of edible mushrooms closely related to anatomically simpler cup fungi. These distinctive fungi appear honeycomb-like, with their cap composed of a network of ridges with pits. Morels are sought by thousands of enthusiasts every spring for their supreme taste and the joy of the hunt, and are highly prized by gourmet cooks, particularly in French cuisine. Morels have been called by many local names; some of the more colorful include dryland fish, because when sliced lengthwise then breaded and fried, their outline resembles the shape of a fish; hickory chickens, as they are known in many parts of Kentucky; and merkels or miracles, based on a story of how a mountain family was saved from starvation by eating morels. In parts of West Virginia, they are known as molly moochers or muggins. Due to the partial structural and textural similarity to some species of Poriferans (sponges), a common name for any true morel is sponge mushroom. The scientific name of the genus Morchella is derived from morchel, an old German word for mushroom (this may be another source for the name "merkel"), while morel itself is derived from the Latin maurus meaning brown.