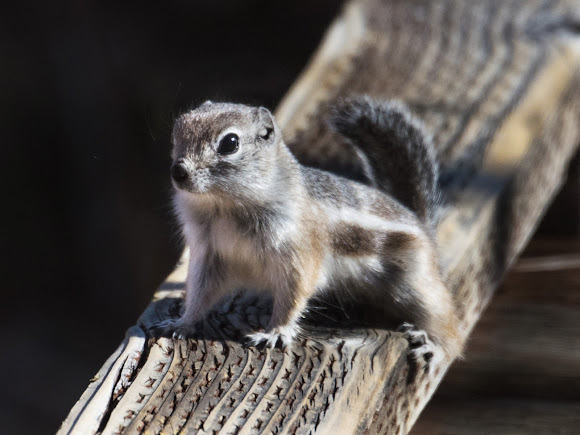 This ground squirrel is distinguished by a tail with a white underside (2nd photo above), hence its namesake. It holds its tail erect or over its back when perching on its hind legs or running. It has a white stripe on the side as pictured. It has about three inches tail, with overall length with those I have spotted at about seven to nine inches. When we first spotted these guys, we thought they were chipmunks, as they bear a resemblance to those we have seen in the eastern US.

This squirrel was spotted in a riparian area in the foothills where the Mojave Desert meets the Spring Mountains. It has a combination of scrub oak and cactus with sandy, rocky soil. The temperature is generally mild in the winter, with extremes in summer months well into the 90’s and low 100’s. The squirrels are active during daytime in the winter, and in morning and late afternoon in the summer. They live in burrows, which affords them protection from predators, as well as from weather temperature extremes. Their territory ranges in the west from southern Oregon south through California/Nevada/Utah/Colorado/New Mexico into Mexico and the Baja.

Some sources indicate the tail, with the white underside, is a means of signaling to others of impending danger. They live in colonies in areas I have observed. They are very active during the day, and according to references stay in their burrows at night because of predator threat (coyotes, owls, hawks, snakes). They are omnivorous, eating mostly vegetation and seeds. They as well feed on insects.

Thanks James and Liana.

That's a little bit of cute right there. Thank you for sharing :)

What a Beautiful little squirrel

Thanks, Lisa and Κώστας. I do appreciate the recognition!

Congrats Jim! This adorable rodent has captured you a SOTD! Thank you for sharing!