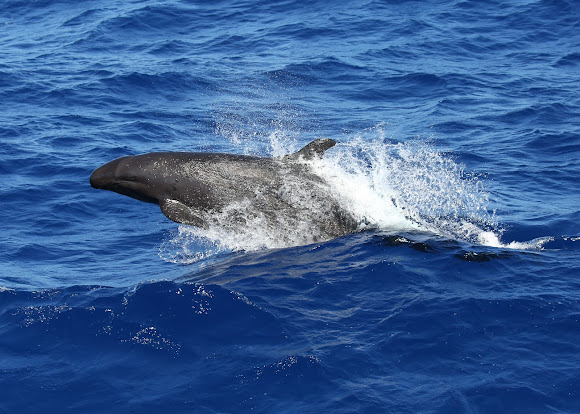 Large black, and slender member of the Globiocephalidae family (Orca, False Orca and Pilot Whales). Adults grow 4-5m long and weigh in between 1-2 tonnes. Males generally larger than females. Have 44 round, sharpened peg-like teeth. Fins are swept back with flippers having the appearance of an 'elbow' and a relatively small 'sickle' shaped dorsal.

Found throughout most tropical and temperate seas. This one individual was seen just off Raoul Island in the Kermadec group. Often seen in large pods of 20 plus animals, it will sometimes form Mega Pods of many hundreds.

Not a well studied species, the best studies having been done with animals in Hawaii. Unfortunately showing a great decline in numbers there and now classed as endangered in the USA. World wide numbers have not been so well documented but reasonable to assume same patterns. Ref: Wikipedia and other sources.

Great shots. Congrats and thanks for sharing all your incredible stuff.

Thank you Venusflytrap2000. My pleasure to share this spotting with you all.

Congratulations on spotting of the week

Thank you so much Jim, Polilla and Michael for your comments. Yes Polilla, as far as I could see this animal was on its own which is apparantly unusual for this species. To be fair I just noticed this black shadow under the water and followed it with the lens. As luck would have it it breached in front of me. I had no idea what it was until it surfaced so wasn't really looking for any others. It was gone just as quickly.

Thank you Chris, Lauren, Neil and Mark. My pleasure to share with you. I had never seen one before either Neil but was unmistakable when it erupted from the water.

Congrats, Triggs. A wonderful spotting. I've heard of these whales, but until now had never seen one. Thanks for the intro :)

wonderful shot. congratulations for the SOTW.

Oh wow! Thank you Lisa and other PN Rangers for voting this SOTW. It was an incredible experience to see this wonderful creature in such an extraordinary place.

Congratulations triggsturner! This amazing spotting has been selected as our PN Spotting of the Week! Thank you so much for sharing with us!

Thank you Ashley. Always an honour to be nominated.