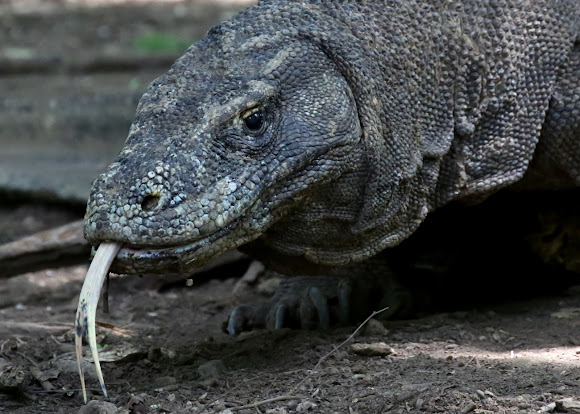 Very large terrestrial moniter lizard. In fact the largest in the world today growing up to 3m (10') long and weighing up to 70kg (150lbs) +. The tail makes up half the total body length. A mottled grey brown with the scales having tiny bones under them making their hide extremely tough. The head is large and the animal has a long pale yellow coloured, forked tongue, and huge claws.

This animal seen on Komodo Island in the reserve area. Its main prey is deer so seems to like areas of low scrub good for ambushing prey but also likes open areas to bask. Occurs only a few islands now and the species is classed as 'vulnerable'. Images show a dragon basking just in from the beach in partial shade.

There has been a lot of discussion and some study done on the apparent toxicity of dragon saliva and or possible venom production. Certainly animals in the wild have more highly toxic bacteria in their mouths than ones in captivity. In 2009 it was discovered that this species have two venom glands producing several toxic proteins. One thing is for sure however, one wants to avoid getting bitten by these magnificent lizards.

Thank you Polilla. These critters can be suprisingly quick so was definately a thrill getting this close! It was on my bucket list to see too. Keep dreaming, am sure you will get there.