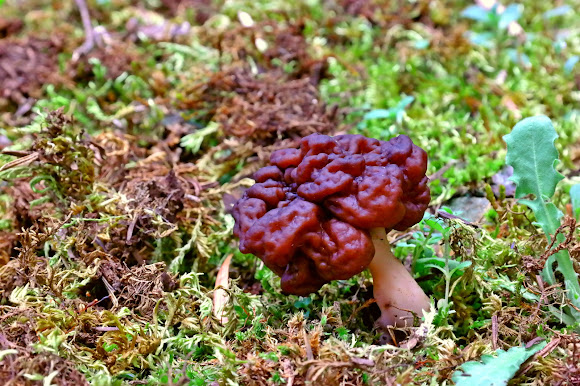 Resembling a brain, the irregularly shaped cap may be up to 10 centimetres (3.9 in) high and 15 centimetres (5.9 in) wide. Initially smooth, it becomes progressively more wrinkled as it grows and ages. The cap colour may be various shades of reddish-, chestnut-, purplish-, bay-, dark or sometimes golden-brown. Specimens from California may have more reddish-brown caps. Attached to the cap at several points, the stipe is 3–6 centimetres (1.2–2.4 in) high and 2–3 centimetres (0.8–1.2 in) wide. Gyromitra esculenta has a solid stipe whereas those of true morels (Morchella spp.) are hollow.The smell can be pleasant and has been described as fruity, and the fungus is mild-tasting. The spore print is whitish, with transparent spores that are elliptical and 17–22 μm in length. Gyromitra esculenta resembles the various species of true morel, although the latter are more symmetric and look more like pitted gray, tan, or brown sponges. Its cap is generally darker and larger.

Gyromitra esculenta grows on sandy soil in Temperate coniferous forest and occasionally in deciduous woodlands. Among conifers it is mostly found under pines (Pinus spp.), but also sometimes under aspen (Populus spp.).The hunting period is from April to July, earlier than for other species, and the fungus may even sprout up with the melting snow. It can be abundant in some years and rare in others. The mushroom is more commonly found in places where ground has been disturbed, such as openings, rivulets, washes, timber clearings, plowed openings, forest fire clearings, and roadsides. Enthusiasts in Finland have been reported burying newspaper inoculated with the fungus in the ground in autumn and returning the following spring to collect mushrooms.