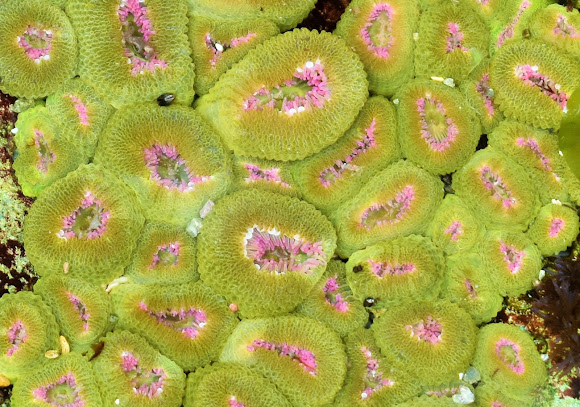 There were dozens of members in this large colony. In the battle for the preferred positions in tide pools these territorial anemones will actually wage war on other colonies that have a different genetic disposition. Aggregating anemones have specialized tentacles called acrorhagi that are used solely to deter other colonies from encroaching on their space.

Spotted in a tide pool at Tongue Point Marine Sanctuary.

A study of two colonies on a boulder removed from the shore and brought into a laboratory revealed that hostilities between neighboring colonies follow the tides. As water rushed into the tank, warrior polyps inflated their acrorhagi, tripled their body length and began reaching into an empty swath of rock between the colonies. Occasionally, a polyp from one of the colonies would move into the spatial zone between the two colonies, acting as a scout, and would be attacked by the warrior polyps of the other clone. If the scout polyp received enough stings, it would be attacked by its clonemates upon return to its own colony. The return of an attacked scout to the clone with acrorhagial peel may serve to communicate the presence and identity of neighboring clones to the interior of the colony.(Wikipedia)

Amazing spotting, Brian. Great notes too. I have never seen so many anemones in a colony. What brutal little beasts!