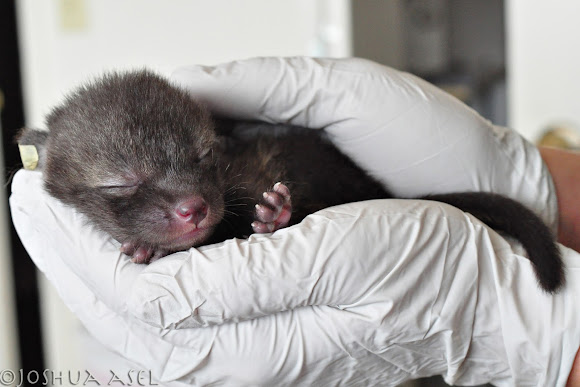 The gray fox is monogamous. The breeding season of the gray fox varies geographically; in Michigan, the gray fox mates in early March, in Alabama, breeding peaks occur in February. The gestation period lasts approximately 53 days. Litter size ranges from 1 to 7. Kits begin to hunt with their parents at the age of 3 months. By the time they are 4 months old, the kits will have developed their permanent dentition and can now easily forage on their own. The family group still remains together until autumn when the young reach sexual maturity. Then, they disperse.

Two weeks old and heir eyes not even open yet, these cute guys came to us after their mom was trapped a released somewhere else. The capturer did not realize she was a new mother and a couple days later or so, she heard the whimpering cubs and collected them. She brought them to the Sonoma County Wildlife Rescue center where we can watch after them, even every couple hours during the night. I don't know what's going to happen to them.

Hi everyone! I know some of you have been wondering and asking about these cute little guys so I have an update for you. Unfortunately, one of them died the second day (lost too much body heat), but the other three, 2 males and 1 female, are all doing great! :) I gave all three baths and a feeding today. They all have just started vocalizing (lots of whimpers mostly) and have their eyes open. The Exec. Director was surprised by the female grr-ing at me in protest of her bath. That was a first apparently. Thank you all again for asking how they're doing and I'll keep you all updated if you like :)

Four :) Me too, of course all of us there want them to go living back in the wild but their future is a matter of discussion, last time I checked. will ave an update on tuesday. thank you for your care and prayers. I will update everyone asap :)

Three? Will they be able to be released eventually or will they be considered "humanized" and perhaps put in a zoo or something? Just curious. My heart goes out to them. I hope and pray they survive and are able to live out their lives in the wild. :-)

Thank you very much Karen for the feature! :) and also thank you Nann and Env :) I really hope they make it too.

I hope they make it! Cute little babies!

It’s spring in the northern hemisphere, even if it doesn’t feel like it everywhere, and the breeding season for most native wildlife. Sadly it is also the time when many animals come into conflict with humans as they seek safe places to raise their families in our neighborhoods. This gray fox kit and its siblings were brought to a wildlife rescue center after their mother was trapped and relocated, because the homeowner was unaware of their existence until it was too late.

Ideally no animal should be removed during the breeding season unless it is absolutely necessary. It is also important to check for the presence of young before blocking any entrance that wildlife might be using to get into roof spaces of under buildings.

Thanks Everybody! Hey Princess she has 3. and yeah Karen tell me about it. it's illegal to relocate in Ca but sadly it happens anyway. wish I knew why she got relocated. I'm going to be photographing them every week or so, so hopefully I'll find out :)

How adorable. And how sad that their mother was relocated. Foxes cause very little trouble unless you keep poultry in an insecure pen.

How many brothers and sisters dose he/she have ?

Thanks Mandy and Emily! Yeah me too. They have a good start :)

Oh my goodness! So precious!

Aww! I hope they grow up healthy and are able to be released.