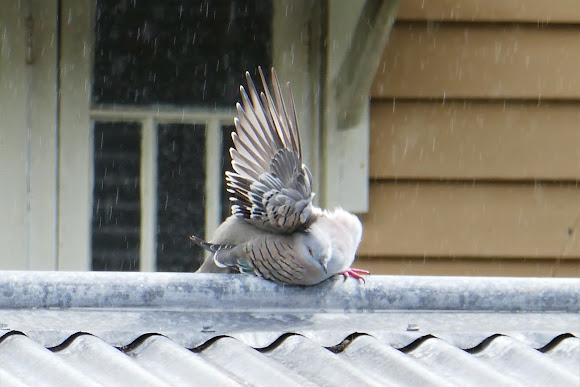 Ocyphaps lophotes, commonly known as the crested pigeon and top notch pigeon, is a bird found widely throughout mainland Australia (except for the far northern tropical areas). It is the only member of the genus Ocyphaps. Plumage is grey with tinges of brown and green. It has a feathered but slender, black spike on top of the head. They run with the crest erect... which always amuses me! This spotting is of a lone adult sitting on the peak of a roof. A brief shower of rain and it raised it's left wing. The rain stop and the wing went down. Rain started again and the wing went up. This happened several times and it was fascinating to watch!

Rooftop in suburban Brisbane, Queensland. This is a common species in urban areas.

Love it when the wing goes up! I was watching some Peaceful Doves do the same over the holidays, when the sprinkler got turned on :D Thank you for sharing Neil :)