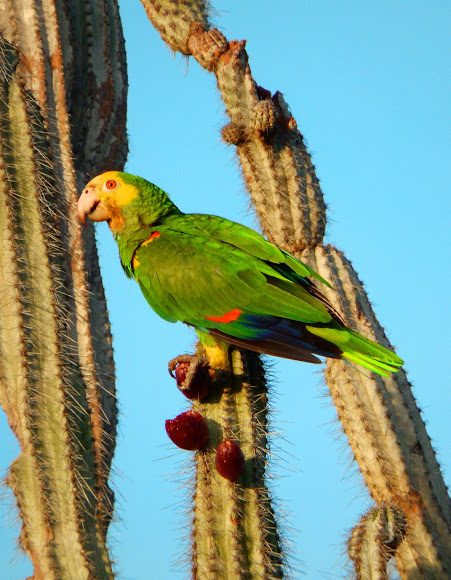 The yellow-shouldered amazon is mainly green and about 33 cm long. It has a whitish forehead and lores, and a yellow crown, ocular region and - often - ear coverts and chin. The bare eye-ring is white. The thighs and the bend of the wing ("shoulder") are yellow, but both can be difficult to see. The throat, cheeks and belly often have a bluish tinge. As most members of the genus Amazona, it has broad dark blue tips to the remiges and a red wing-speculum. Its beak is horn coloured. In its range the yellow shoulder patch and extensive yellow on the head distinguish the yellow-shouldered amazon from other Amazona species, which have red or orange on the shoulder and less yellow on the head (the orange-winged amazon, which has as much yellow to the head as some yellow-shouldered amazons, has a blue ocular region). However, outside its range, several other Amazona species have as much - or more - yellow on their heads.

Due to ongoing habitat lost, small population size, limited range and overhunting for the cagebird trade, the yellow-shouldered amazon is evaluated as Vulnerable on the IUCN Red List of Threatened Species. It is listed on Appendix I and II of CITES. There are only around 900 parrots remaining on Bonaire. Populations exist on the Venezuelan coast as well as on the country’s islands of La Banquilla and Margarita. Historically, the parrots also lived on the island of Aruba but they became extinct there in the 1940s. Bonaire is home to the only surviving native population outside of Venezuela.

Congratulations! this is a new species for me...thanks.

Congratulations The MnMs, your Yellow-shouldered Amazon is our Spotting of the Day:

"We are now delighted to count a spotting of a Yellow-shouldered Amazon (Amazona barbadensis) which is not captive, and it is our Spotting of the Day! This uniquely coloured parrot has a mostly brilliant green plumage, with yellow on the shoulders, crown and ocular region. The yellow-shouldered amazon is evaluated as Vulnerable on the IUCN Red List of Threatened Species because of habitat lost, small population size, limited range and capture for the pet trade. This species is now found only in northern Venezuela, on the Venezuelan islands of Margarita and La Blanquilla, and on the island of Bonaire (Caribbean Netherlands) where this spotting was made by Project Noah members The MnMs".

Thanks! We were really happy to spot them in the wild and later on, also hear from Echo and their efforts to protect them.
These we spotted very close to our lodge in nearby cacti. I wonder how can they land on them without getting hurt with the long spines! They eat the fruits of the cacti.

Fantastic Marta! The only other two we have on Project Noah are captive. You have been thrilled to see these!