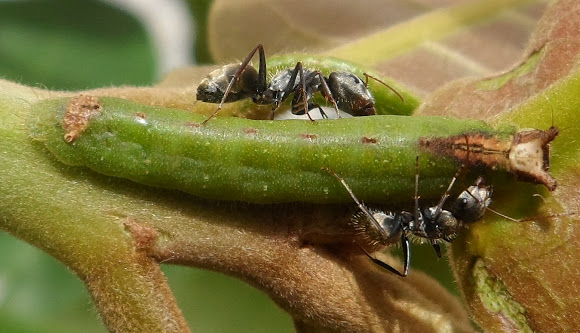 Myrmecophily among lycaenid caterpillars differs from the associations of hemipterans because caterpillars feed on plant tissues, not phloem sap, and therefore do not continually excrete honeydew. Caterpillars of lycaenid butterflies have therefore evolved specialized organs that secrete chemicals to feed and appease ants. Because caterpillars do not automatically pass honeydew, they must be stimulated to secrete droplets and do so in response to ant antennation, which is the drumming or stroking of the caterpillar's body by the ants' antennae. Some caterpillars possess specialized receptors that allow them to distinguish between ant antennation and contact from predators and parasites, and others produce acoustic signals that agitate ants, making them more active and likely better defenders of the larvae. As with homopteran myrmecophiles, ants protect Lycaenid larvae from predatory insects (including other ants) and parasitoid wasps, which lay their eggs in the bodies of many species of Lepidoptera larvae. The enemy-free space that ants can provide for lycaenids is significant: one study conducted by Pierce and colleagues in Colorado experimentally demonstrated that survival rates of G. lygdymus larvae declined 85-90% when ant partners were excluded. These interactions do not come without an energetic cost to the butterfly, however, and it has been shown that ant-tended individuals reach smaller adult sizes than non-tended individuals due to the costs of appeasing ants during the larval stage. Interactions with ants are not limited to the butterfly's larval stage, and in fact ants can be important partners for butterflies at all stages of their life cycle. For example, adult females of many lycaenid butterflies preferentially oviposit on plants where ant partners are present, possibly by using ants' own chemical cues in order to locate sites where juvenile butterflies will likely be tended by ants.Finally, while ant attendance has been most widely documented in Lycaenid butterflies (and to some extent riodinid butterflies), many other lepidopteran species are known to associate with ants, including many moths.