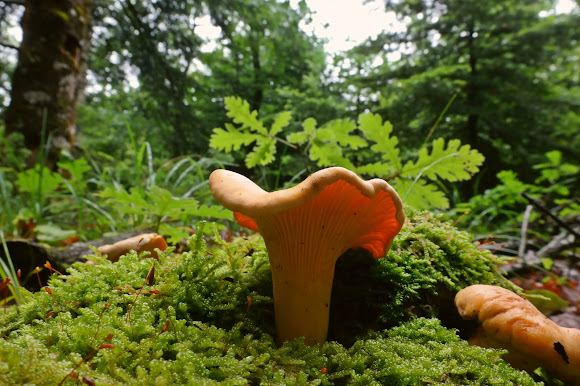 Cantharellus cibarius, commonly known as the chanterelle, or girolle, is a fungus. It is probably the best known species of the genus Cantharellus, if not the entire family of Cantharellaceae. It is orange or yellow, meaty and funnel-shaped. On the lower surface, underneath the smooth cap, it has gill-like ridges that run almost all the way down its stipe, which tapers down seamlessly from the cap. It emits a fruity aroma, reminiscent of apricots and a mildly peppery taste (hence its German name, Pfifferling) and is considered an excellent edible mushroom.

Chanterelles tend to grow in clusters in mossy coniferous forests, but are also often found in mountainous birch forests and among grasses and low-growing herbs. In central Europe, including Ukraine, the golden chanterelle is often found in beech forests among similar species and forms.

The false chanterelle (Hygrophoropsis aurantiaca) has a similar appearance and can be confused with the chanterelle. Distinguishing factors are color (the true chanterelle is uniform egg-yellow, while the false one is more orange in hue and graded, with darker center) and attachment of gills to the stem (the true chanterelle has ridges or wrinkles, which can be quite deep, but not true gills)

Thanks all of you so much! Kostas-Chris-Antonio-Lisa!!!

Congratulations for the SOTD.

It will be great to have it in the "Biodiversity of Greece" (http://www.projectnoah.org/missions/7964...), so we can have also records for mushrooms!

Beautiful find ΚώσταςΤσιλιγκάνος,a delicious mushroom :),congrats on the well deserved SOTD and thanks for sharing

Congratulations ΚώσταςΤσιλιγκάνος, your beautiful mushroom is our featured Spot of the Day! Thanks for sharing!