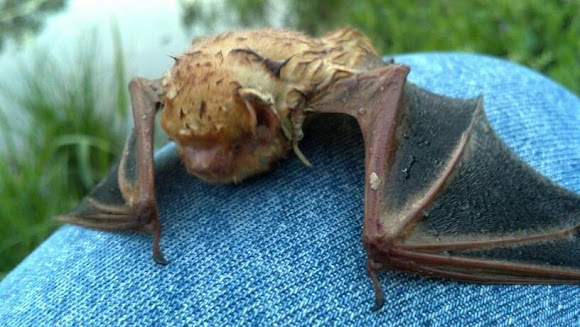 As suggested by the bat’s name, its fur is uniformly dark brown and glossy on the back and upper parts with slightly paler, greyish fur underneath.[2] Wing membranes are dark brown on a typical wingspan of 22–27 cm (8.7–11 in). Ears are small and black with a short, rounded tragus. Adult bats are typically 6–10 cm (2.4–3.9 in) long and weigh 5–14 grams (0.2–0.5 oz). Females tend to be larger than males. The fore and hind limbs have five metapodials. The skull of the brown bat lacks a sagittal crest. Its rostrum is shortened and has upslope profile of the forehead. Its braincase flattened and sub-circular when observed dorsally. The bat has 38 teeth all of which including molars are relatively sharp, as is typical for an insectivore, and canines are prominent to enable grasping hard-bodied insects in flight. The little brown bat can be distinguished from the Indiana bat by the absence of a keel on the caclar and long hairs on the hind feet that stretch longer than the toes. Compared to the long-legged bat, the brown bat has a shorter tibia and lesser amounts of ventral wing hair in addition to the lack of a keel on the caclar.[3]

The little brown bat is found throughout much of North America.[4] It is most common in the northern half of the continental United States and southern Canada. Most specimens from the northern edge of its range are males although nursery roosts have been found in the Yukon. Brown bats have been found in Iceland, Alaska, and Kamchatka, likely due to accidental ship transportation by humans.[4] Habitat and roosting The little brown bat lives in three different roosting sites: day roosts, night roost and hibernation roosts.[4] Bats use day and night roosts during spring, summer and fall while hibernacula are used in winter. Day roosts are usually found in buildings or trees, under rocks or wood piles and sometimes in caves. Nursery roosts are found in both natural hollows and in buildings (or at least close to them). Nursery roosts have also been found under the sheet metal roofs of trappers' caches[5] and attics of buildings.[6] Night roosts tend to be in the same buildings as day roosts, but these roosts tend to be in different spots that are more constrained and the bats pack together for warmth. Bats rest in night roosts after feeding in the evening which may serve to keep their feces away from the day roosts and thus less noticeable to predators.[4] Brown bats typically hibernate in caves and perhaps unused mines. Northern populations of bats enter hibernation in early September and end in mid-May while southern populations enter in November and ends mid-March.[4] Little brown bats are not true hibernators. As observed in the Mid-Atlantic States during periods of warming during the winter, typically over 50 degrees (F), little brown bats emerge from their winter torpor and hunt insects that have emerged as well in response to the warmer conditions.

I was just Fly Fishing at the pond down the road catching some small bass on poppers, and watching a little Brown Bat flying around the pond. Well he skimmed the water, I assume to get a drink, and got stuck in the water face down!! I made 3 casts and managed to gently snag him and pull him to shore. He climbed out of the water & I held him for a bit then put him on my knee. He crawled up my leg, and left arm around to the back of my neck. I started walking home with him to show the girls, and when I got halfway up the drive he flew off of my neck. :) Here are some pics...

Thanks for the corrected ID J.T. I appreciate that. I'll have to update the spotting with the correct information when I have more time. So cool that you get to work with Bats! I have always been fascinated by them. Thanks again!

Cool story, this is actually an eastern red bat due to the furred uropatagium (back tail wing).

How exciting! We put up a bat box a couple of years ago but haven't had any takers yet! Maybe this year....

Thanks, Ranger KarenL!! I added the spotting to the North America Bat Tracker Mission as you suggested. Glad to be part of the community. Just got a Bat House put up yesterday!! Excited to see if it gets occupied this year or not.

What an awesome spotting and story....Welcome to Project Noah :)

Thank you for rescuing him !