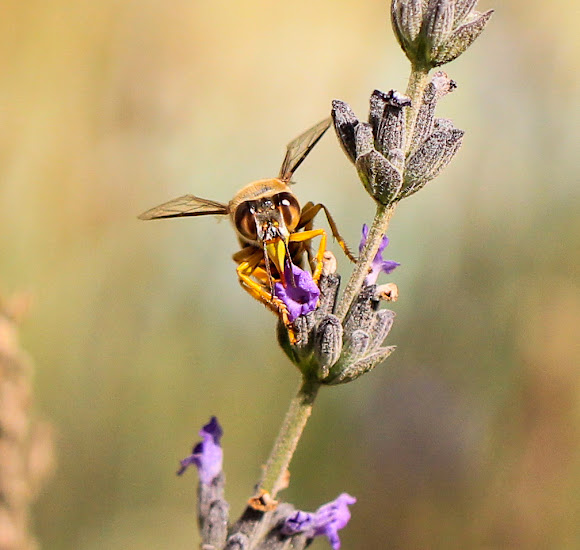 This sand wasp from the genus Bembix in the Sphecidae family (Mud Daupers and Sand Wasps) was photographed on lavender plants alongside honey bees which made the wasp stick out almost immidiatly. At around 2cm this wasp was coloured as many of its species with a striking yellow and black barred abdomen. The female digs tunnel like homes in sandy soil where they line cells with prey items that in most cases are members of the flies. Their burrows are sometimes opened and closed by cuckoo wasps that lay their own egg in the chamber that hatches and feeds off the sand wasp larva.

Sandy expanses such as beaches or flats

Amazing shot and congratulations for SOTD. :)

Wow, what a great surprise as I head off to work this morning!! Thank you Project Noah for making my day. It is a great pleasure to share. Thank you Antonio as always for your kind words and support :)

Great find Michael,congrats on the well deserved SOTD and thanks for sharing

Congratulations Michael, your Sand Wasp is our Spotting of the Day!

"You're looking at the face of a little digger! This Sand Wasp (Bembix sp.) is our Spotting of the Day. Sand wasps (Tribe: Bembicini) build nests in the shape of short tunnels in sandy soil. These burrows end in one or more cells in which the female lays an egg and places a prey item for the developing larva to feed on".

Thank you very much for the nomination. Have a great weekend!!