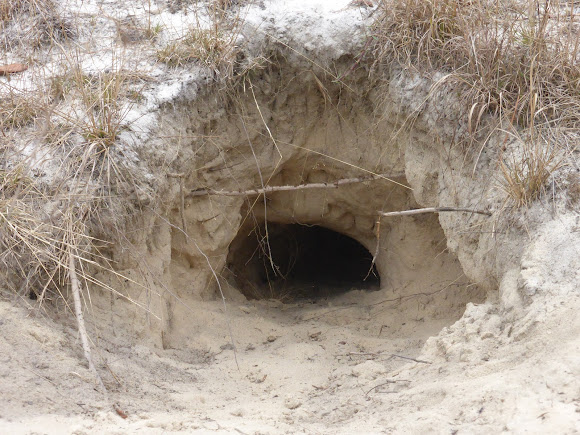 This burrow had a side burrow near the entrance. In the first photo you can sort of see it on the right, and in the second photo you can more clearly see the secondary burrow. I doubt the secondary burrow on the right belongs to a tortoise based because it isn't quite the half-circle shape of a tortoise's and also because it seems to go upward a little. I am guessing the side burrow was created by a small mammal.

Sandy area near lots of oak trees at Sweetwater Preserve

Gopher tortoises are ecosystem engineers and a keystone species because their burrows create shelter for a vast number of animal species, including some insects that have never been seen outside a burrow. About 400 animal species have been collected from active or abandoned tortoise burrows, including Indigo Snakes, which are now known to spend a large portion of their time in burrows (typically Gopher Tortoise burrows).