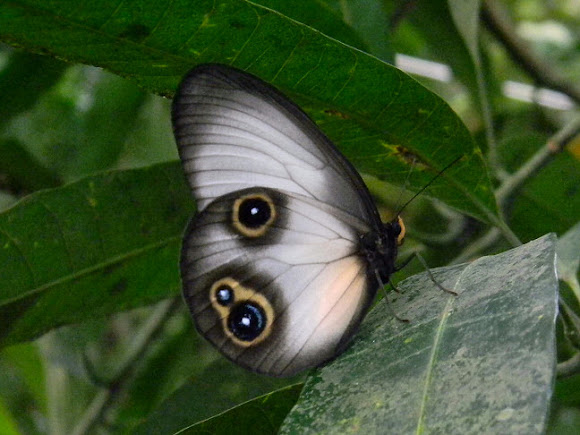 This is one of the silky owl butterflies (Taenaris). This specimen has different eyespot markings than the most commonly seen species at this location (Taenaris cf. catops). "The species of Taenaris are whitish to grayish, some species with a yellow anal margin on the hindwing, and with prominent eyespots displayed on the hindwings. Some species feed on cycads and may be chemically defended, serving as models for Batesian mimicry in a variety of other groups (including Hyantis, Mycalesis, Hypocysta, Elymnias, and Hypolimnas). Most species occur in New Guinea and surrounding islands." (EOL). Based on an illustration in van Mastrigt et al (2010) and a corroborating comment below (by Jeff), I am going to call it T. dimona. However it is important to note that "Only in a few cases is identification to species possible from the pattern of the ocelli since these can be highly variable. All [species] are diurnal but appear to prefer the shade, feeding on rotten fruit on the forest floor." (Gotts and Pangemanan, 2001).

Observed alighting on various trees (mostly mango in this spotting) after feeding on a rotten fallen guava fruit. This was in a large semi-urban yard & garden near a disturbed patch of remnant forest. This is in the equatorial lowland tropics of northern New Guinea.

Thanks Jeff. While I mentioned T. dimona in my description (and now taking into consideration its 8 Papua subspecies, and as you mention, thaema not being one of them) I've been playing it conservatively. I might end up going with T. dimona. But if species show enough variability in ocelli to be confusing, I am guessing that subspecies certainty might require more than the naked eye? I'd certainly like to obtain Parson's! :-)

Looks identical to Taenaris dimona thaema in Parson's Butterflies of New Guinea. Distribution would be wrong for this subspecies however & I don't know which subspecies occur in your area. (Supposedly there are 13 ssp.) I would put money on it being this species though.

Congratulations Scott on your SOTD.

Congrats Scott Frazier for the SOTD, and what a spotting!

I love the faint pink blush in the hind wing - lovely. Congratulations, Scott !

It's a lovely butterfly, congratulations on SOTD.

Thanks so much dotun55, shekainah, Carol & Reza!

WOW! Scott! Great series and so great with the information.

The blend of black and white with just few eye spots makes this one extraordinary. Stunning owl!

Thanks Viv, Mark and Satyen!

Congratulations on a silky SOTD.

and 45 other people favorited this spotting