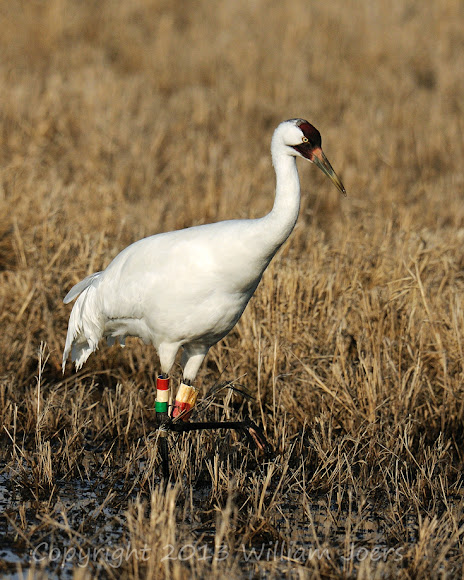 The adult Whooping Crane is white with a red crown and a long, dark, pointed bill. Immature Whooping Cranes are cinnamon brown and are called colts. While in flight, their long necks are kept straight and their long dark legs trail behind. Adult Whooping Cranes' black wing tips are visible during flight. The species can stand up to 1.5 meters (5 feet) and have a wingspan of 2.3 meters (7.5 feet). Males weigh on average 7.3 kg (16 lb), while females weigh 6.2 kg (14 lb) on average. The body length averages about 132 cm (52 in).

This bird was found in a grassland area in Adams County, Wisconsin.

This bird is a free roaming bird, it is tagged for ID purposes so that it can be identified by any observer. It is also radio collared so it can be tracked and studied. This bird was photographed in April of 2013 in Adams County, Wisconsin, just a few weeks after it had returned from where it had wintered in warmer climates.This bird is carrying a tracking device on one of his legs, and the bird was banded once with those colored leg bands. The reason they are so big is simple. In the event the tracking device fails, They want anyone who sees the bird even if they are using a spotting scope at a great distance to be able to see the color bands on their legs. The color codes of the bands and the placement of those colors on a particular bird Identify that bird. To learn more about this bird and where it has been, please go to the last reference, which is about this particular bird and its life story.

Landmark Expert, There are less then 700 of these birds worldwide. There were less then two dozen back in the 1940's. Every whooping crane is now banded ( The bands is a way to Identify the bird in the field) and many birds also carry a radio transmitter so that people can track them via GPS. This bird is a free ranging bird, and had flown back from Florida, where it had wintered. I photographed this bird two weeks after at had returned to Wisconsin. If you follow the link in my reference portion on this page you can read about the banding and about this bird. I have provided the link as follows: http://www.learner.org/jnorth/tm/crane/0...

superb! is this a captive animal?> [judging from the leg-bands]

Thank you Satyen, and Jemma.

Thanks so much, Emily Marino. I was thrilled to finally see one of these birds up close and personal. I had seen them the year before but at such a great distance it was not worth trying to capture an image of them.

Thanks Noah, I finally got the link to this specific bird to work by putting it in the references.