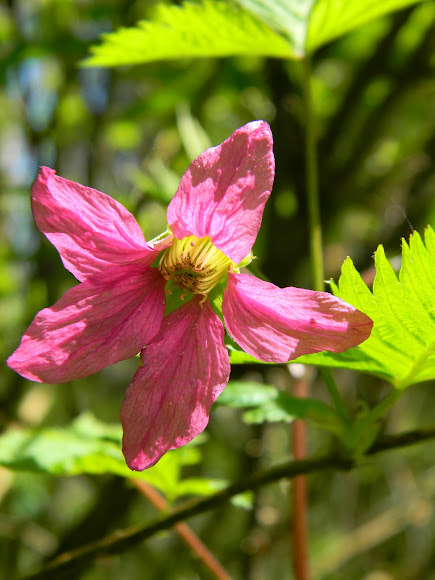 Rubus spectabilis (Salmonberry) is a species of Rubus native to the west coast of North America from west central Alaska to California. It is a shrub growing to 1–4 m tall, with perennial, not biennial woody stems (unlike other species). The leaves are trifoliate, 7–22 cm long, the terminal leaflet larger than the two side leaflets. The leaf margins are toothed. The flowers are 2–3 cm diameter, with five purple petals; they are produced from early spring to early summer. The fruit matures in late summer to early autumn, and resembles a large yellow to orange-red raspberry 1.5–2 cm long with many drupelets. In the Pacific Northwest of North America the berries can ripen from mid-June to late-July.

Salmonberries are found in moist forests and stream margins, especially in the coastal forests. They often form large thickets, and thrive in the open spaces under stands of red alder (Alnus rubra).

On the same day in the same area, I also spotted the salmonberry with the pale pink flowers: http://www.projectnoah.org/spottings/230... I don't know how common the one is. Any idea? Spotted at Cougar Mountain Regional Wildland Park (Anti-Aircraft Peak Trailhead) in Issaquah, WA.

Many beautiful flowers growing in the woods in your area!