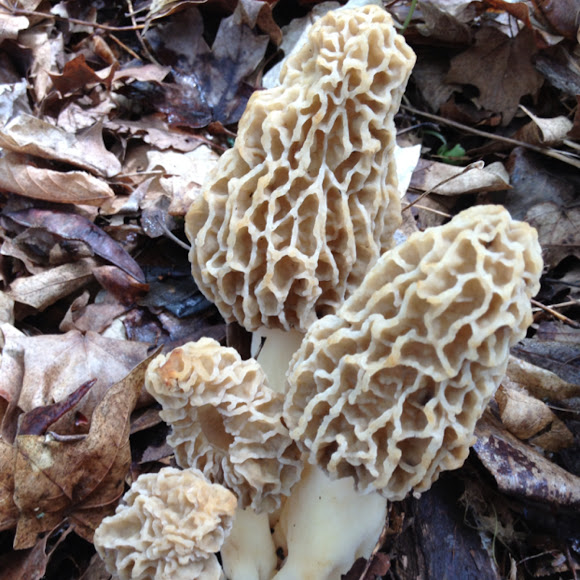 Drawing by von Albin Schmalfuß, 1897 Fruit bodies are sometimes found solitary, but more often in groups, on the ground in a variety of habitats. A preference for soil with a limestone base (alkaline) has been noted,[5] but they have also been found in acid soils.[16] The mushroom is usually found in early spring, in forests, orchards, yards, gardens and sometimes in recently burned areas.[7] In North America, it is sometimes referred to as the "May mushroom" due to its consistent fruiting in that month, but the time of fruiting varies locally, from February to July. It is typically the last morel species to fruit in locales where more than one species are found.[17] For example, in Northern Canada and in cooler mountainous regions, morels typically do not appear until June.[18] It has been suggested that the springtime fruiting may be due to their ability to grow at low temperatures to the exclusion of competition,[19] a conclusion later corroborated by experiments correlating spore germination to soil temperatures.[20] One author suggests the acronym PETSBASH may be used to remember the trees associated with morels: pine, elm, tulip, sassafras, beech, ash, sycamore, and hickory.[21] In North America, it is widely distributed, but especially common in eastern North America and the Midwest. David Arora notes that "large crops can also be found around the bases of dying (but not quite dead) elms attacked by Dutch elm disease."[15] The species has been named state mushroom of Minnesota, and was the first state mushroom of any state.[22][23] It can also be found in Brazil.[24]