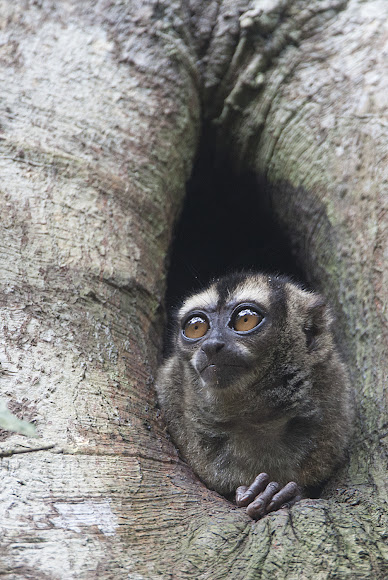 Night monkeys have big, brown eyes and therefore have increased ability to be active at night. Their ears are rather difficult to see, and their genus name, Aotus, means "earless" because of this. There is little data on the weights of wild night monkeys.

1 of the 7 species of primates I spotted during my time in Yasuni National Park, claimed as the most biodiverse place in the world. 10 species of Monkey have been confirmed to have been found in this region, the only 3 species missed were: Monk Saki Monkey, Ecuadorian Saki Monkey, and Pygmy Marmoset. *edited to add a second shot which showed the second monkey briefly*

Congratulations to be in National Geographic spotting of the week!
That is so special and you are so proud of.

Congratulations on your National Geographic SOTW! This spotting is truly fantastic!

Really nice all around, congrats Cody!

Congratulation on the National Geographic SOTW, fantastic work, Cody.conway, thank you for sharing.

Thanks Env and Noel!

Congratulations Cody for the SOTW honors! Great spot and info!

Thanks all! It's always nice to have some recognition on hard work! For slightly more information on this shot: It was photographed from a canoe standing up in the rain, waiting for the right moment. There were two Night Moneys in this tree, but the other was indeed quite shy. It was shot at 700mm Exp: 1/100, ISO 1600, F5.6
Canon 5D Mk II, 500mm F4 IS L, 1.4x TC EF II

Congratulations Cody on this great achievement. such a Beautiful little monkey.

Congratulations Cody! Your adorable monkey has been chosen National Geographic spotting of the week!

Wonderful spotting and how cool that you saw so many species!

They were quite quiet Tom! And thanks for this becoming the spotting of the week!

Were they really noisy? Another great shot!

Great capture, Cody! I hope you're having fun!!