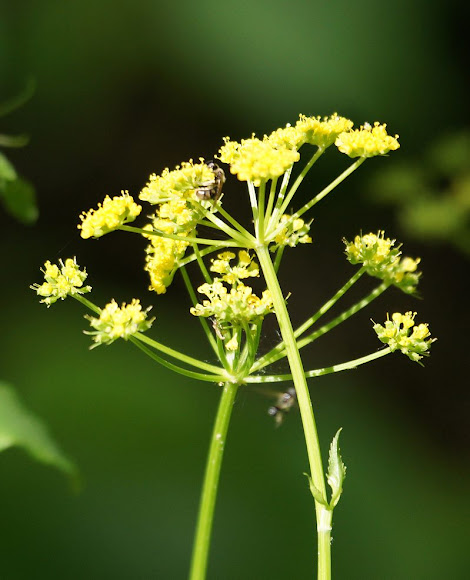 This native North American flower usually ranges in height from forty centimeters to seventy five centimeters tall but can sometimes grow taller. The leaves of the Golden Alexanders can up to eight centimeters long and five centimeters wide. They are normally lanceolate or ovate in shape. Other distinguishing factors of the leaves are that they have serrated edges as well as two or three lobes in the leaf. Golden Alexanders blooms from May to June. Their flowers are yellow in color and bunched at the top of the plant. Each flower is only three millimeters long and has five sepals, five petals, and five stamens. Each flower produces a single three to four millimeter long, oblong, green fruit capsule. These fruit change color as the year goes on and contain a brown seed. In the fall both the leave and the fruit turn purple.

The Golden Alexanders is most often found in habitats such as moist black soil prairies, openings in moist to mesic woodlands, savannas, thickets, limestone glades and bluffs, power line clearings in woodland areas, abandoned fields, and wet meadows. Golden Alexanders is known for its ability to survive dry summers even though it prefers wet habitats.