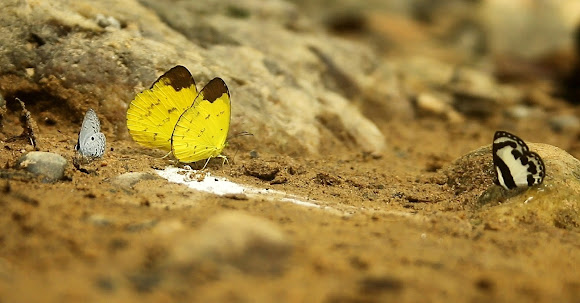 Spotted these beautiful butterflies from 3 different species mud-puddling on a riverbank during my hike in Khao Sok Rainforest. Mud-puddling, or simply puddling, is a behaviour most conspicuous in butterflies, but occurs in other animals as well, mainly insects; they seek out nutrients in certain moist substances such as rotting plant matter, mud and carrion and they suck up the fluid. Where the conditions are suitable, conspicuous insects such as butterflies commonly form aggregations on wet soil, dung or carrion.From the fluids they obtain salts and amino acids that play various roles in their physiology, ethology and ecology.This behaviour also has been seen in some other insects, notably the leafhoppers, e.g. the potato leafhopper, Empoasca fabae. Lepidoptera (butterflies and moths) are diverse in their strategies to gather liquid nutrients. Typically, mud-puddling behaviour takes place on wet soil. But even sweat on human skin may be attractive to butterflies such as species of Halpe.More unusual sources include blood and tears. Again, similar behaviour is not limited to the Lepidoptera, and for example, the various species of bees commonly called sweat bees are attracted to various kinds of sweat and tears, including that of humans, and other bee species have been recorded as doing so to various degrees. In many species puddling behaviour is more commonly seen in males; for example, Speyeria mormonia males puddle with a much higher frequency than females.Furthermore, the presence of an assembly of butterflies on the ground acts on Battus philenor for example, as a stimulus to join the presumptive mud-puddling flock.

Thank you António and Team PN once again!

“Your spotting has been nominated for the Spotting of the Week. The winner will be chosen by the Project Noah Rangers based on a combination of factors including: uniqueness of the shot, status of the organism (for example, rare or endangered), quality of the information provided in the habitat and description sections. There is a subjective element, of course; the spotting with the highest number of Ranger votes is chosen. Congratulations on being nominated!”