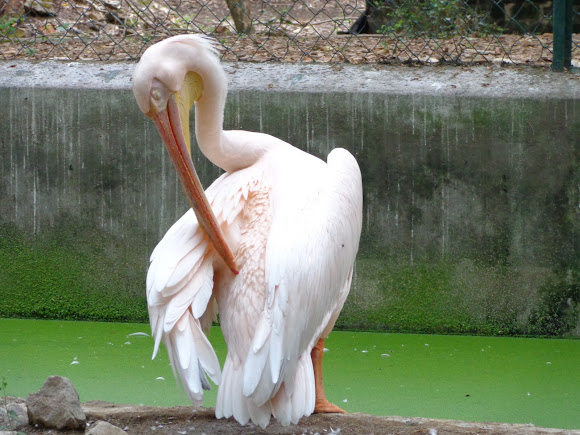 Great White Pelicans are usually birds found in and around shallow, (seasonally or tropical) warm fresh water. Well scattered groups of breeding pelicans occur through Eurasia from the eastern Mediterranean to Vietnam.[5] In Eurasia, fresh or brackish waters may be inhabited and the pelicans may be found in lakes, deltas, lagoons and marshes, usually with dense reedbeds nearby for nesting purposes.[5] Additionally, sedentary populations are found year-round in Africa, south of the Sahara Desert although these are patchy. In Africa, Great White Pelicans occur mainly around freshwater and alkaline lakes and may also be found in coastal, estuarine areas.[9] Beyond reedbeds, African pelicans have nested on inselbergs and flat inshore islands off of Banc d'Arguin National Park.[5] Migratory populations are found from Eastern Europe to Kazakstan during the breeding season. More than 50% of Eurasian Great White Pelicans breed in the Danube Delta in Romania. The pelicans arrive in the Danube in late March or early April and depart after breeding from September to late November.[5] Wintering locations for European pelicans are not exactly known but wintering birds may occur in northeastern Africa through Iraq to north India, with a particularly large number of breeders from Asia wintering around Pakistan.[5] These are birds that are found mostly in lowlands, though in East Africa and Nepal may be found living at elevations of up to 1,372 m (4,501 ft).[5]