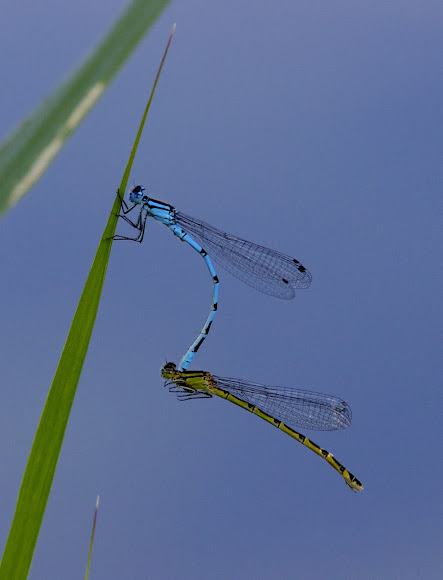 The Azure Damselfly (Coenagrion puella) is a species of damselfly found in most of Europe. It is notable for its distinctive black and blue colouring. Adult male Azure damselflies have a head and thorax patterned with blue and black. They have an azure blue abdomen patterned with black markings. The marking on the second segment of the abdomen is U-shaped, separated from the segment's narrow terminal black band. (This distinguishes it from the Variable Damselfly where the U-shape is joined to the terminal band with a black line.) Segments three to five are blue with broader black terminal bands, lacking the forward-pointing projection the upper surface which adult male Common Blue Damselfly has. Segment six has a similar pattern but with more restricted blue and a broader area of black, and segment seven is mostly black, with just a narrow blue area at the base. Segment eight and much of segment nine are sky-blue, forming a noticeable contrasting patch, but there are small dark markings on the rear upper side of segment nine, which adult male Common Blue Damselfly does not possess. Adult female Azure Damselflies have a head and thorax pattern similar to that of the male, but with dull green replacing the blue colour. The abdominal segments are largely black in colour, with narrow pale markings at the junction between each segment.