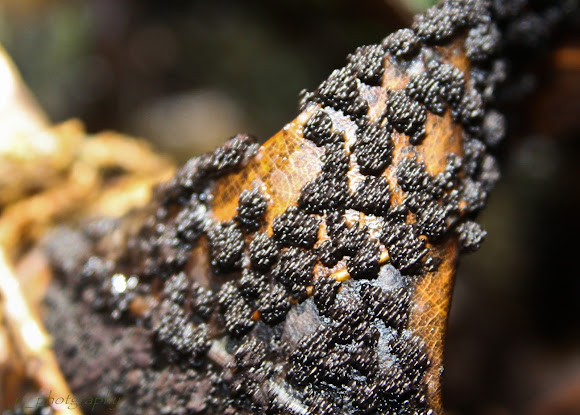 This photo shows a black slime mold eating a decaying Rhododendron leaf. Slime molds were once considered fungi, but unlike fungi, they can move, and their cell membranes are made of different stuff. Slime molds are made up of individual cells that form an aggregate mass. In their visible, aggregate states, they look like blobs, gooey or foamy masses, spilled jelly, or even dog vomit. They may be bright orange, red, yellow, brown, black, blue, or white. These large masses act like giant amoebas, creeping slowly along and engulfing food particles along the way. If a slime mold aggregate is diced up, the pieces will pull themselves back together. The blobs can navigate and avoid obstacles and if a food source is placed nearby, they seem to sense it and head unerringly for it. There are two kinds of slime molds. Plasmodial slime molds (the most common kind) share one big cell wall that surrounds thousands or millions of nuclei. Proteins called microfilaments act like tiny muscles that enable the mass to crawl at rates of about 1/25th of an inch per hour. As long as there is enough food and moisture, the mass thrives. But when food and water are scarce, the mass separates into smaller blobs. The Plasmodium forms stalks topped by sphere-like fruiting bodies that contain spores that are carried by the rain or wind to new locations. Cellular slime molds also produce spores, but these germinate into amoeba-like cells. The cells happily go their individual ways, as long as food and water are available. When nutrients and moisture are scarce, individual cells send out a chemical beacon to attract other cells of the same species. The cells join up to form a mass that looks and acts like a slug to take them to a more favorable location. Cells in cellular slime molds retain their individual cell walls when they form a mass, so the visible slug is actually a collection of hundreds of thousands of individual cells joined together. Slime molds eat decaying vegetation, bacteria, fungi, and even other slime molds. They are most commonly found in forests.

Single-celled slime molds demonstrate the ability to memorize and anticipate repeated events, a team of Japanese researchers reported in January. The study clearly shows “a primitive version of brain function” in an organism with no brain at all. In their experiment, biophysicist Toshiyuki Nakagaki of Hokkaido University and colleagues manipulated the environment of Physarum slime-mold amoebas (near right). As the cells crawled across an agar plate, the researchers subjected them to cold, dry conditions for the first 10 minutes of every hour. During these cool spells, the cells slowed down their motion. After three cold snaps the scientists stopped changing the temperature and humidity and watched to see whether the amoebas had learned the pattern. Sure enough, many of the cells throttled back right on the hour in anticipation of another bout of cold weather. When conditions stayed stable for a while, the slime-mold amoebas gave up on their hourly braking, but when another single jolt of cold was applied, they resumed the behavior and correctly recalled the 60-minute interval. The amoebas were also able to respond to other intervals, ranging from 30 to 90 minutes. The scientists point out that catching on to temporal patterns is no mean feat, even for humans. For a single cell to show such a learning ability is impressive, though Nakagaki admits he was not entirely surprised by the results. After working with the slime mold for years, he had a hunch that “Physarum could be cleverer than expected.” The findings of what lone cells are capable of “might be a chance to reconsider what intelligence is,” he says. From Librarian Science (June 2009 - http://librarianscience.wordpress.com/20...)

Slime molds are just so fascinating! What a cool find, thanks so much for sharing all the wonderful information as well as the image!

That it true Mark. This place I visit has dozens and dozens and dozens of species of mushrooms. It is a small patch of old growth hemlock in a deep cove and is full of fungi and decaying organic matter. Slime molds just add another to the myx. :)

Cool find Jared. Slime molds aren't about decay like fungi. They're more like a shape shifting animal that eats and leaves.

Thanks Sergio. I did not expect to discover two slime molds during the same trip today. Needless to say this place definitely shows signs of decay.