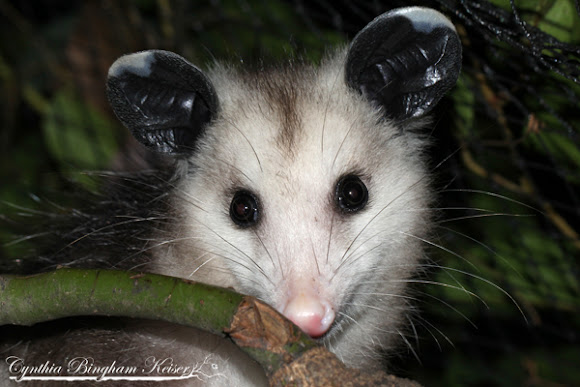 Two young Opossums broke into our outside Aviary through the netting. This one tried to hide behind a single branch. It then stuck its tongue out and sat up a little. When it got tired of me taking photographs, it turned and squeezed through the tiny hold it made as seen in the last image.

Backyard aviary. "The Virginia opossum was not originally native to the Western United States. It was intentionally introduced into the West during the Great Depression, probably as a source of food, and now occupies much of the Pacific coast. Its range has been expanding steadily northward into Canada."

Thank you Carol and Bhagya! They sure are :)

I think opossums are super cute. I saw one huge one at night by the pond in my yard. It was so cool. No photo though. Great job!

Thank you Rob, Ava and Jared! Our Wood Ducks were not happy about these visitors since they came to eat their food.

Uh-oh; must have freaked out the birds!

Love this spotting, great camera work! Keep it up!