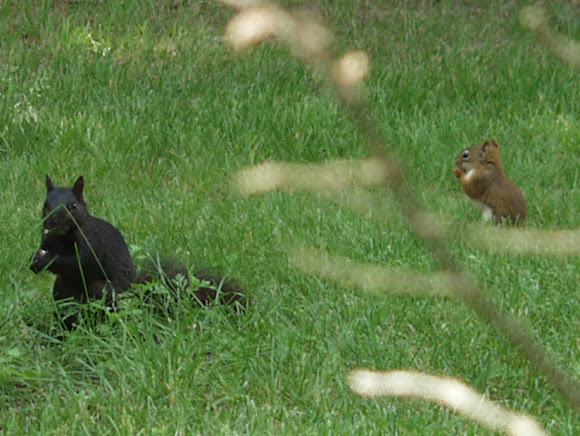 The gray squirrel is one of Minnesota's most common wildlife species. It is often seen in backyards, parks and wooded rural areas. Because of its thick furry tail, it is sometimes called bushytail. The eastern gray squirrel and eastern fox squirrel are among the most sought-after small game animals in Minnesota. A squirrel pressed in hiding against a tree is a challenging target. Moreover, its speed on the ground and through the treetops has vexed many a squirrel hunter. *** Eleven to 13 inches from nose to tail tip, the red squirrel weighs 5 to 9 ounces. It has rusty-red back and sides, dull white underparts, and an elegant white ring around each eye. Range Red squirrels live primarily in coniferous forests of Canada, Alaska, the Rockies, and the northern United States. They also thrive in deciduous forests. They live throughout Minnesota, with the exception of some western counties where farms and grasslands dominate. Behavior Adapted to life in trees, these tiny acrobats demonstrate prodigious agility when running at breakneck speed from branch to branch. They are most active in early morning and late afternoon. In winter they prefer to travel in tunnels under the snow.

Gray squirrels live in hardwood forests, wooded parks and residential areas. They are found throughout Minnesota but are most common in hardwoods in the central part of the state. They make their homes in tree cavities but also build leafy nests in summer and fall. By chewing on the scars where small dead branches have fallen, squirrels help to make nesting cavities for future generations. [Fungi soon invades the wood, softening it to create the hollows.] *** Red squirrels favor pine, fir, spruce, and cedar seeds, which have a high energy content to fuel their hyperactive metabolism. Piles of discarded cone cuttings can be found on stumps or rocks where a squirrel ate. In summer and fall, red squirrels cut and store thousands of green cones in hollow trees or underground caches called middens, which they fiercely defend. In deciduous forests, they add nuts of all kinds, buds, berries, tree sap, and mushrooms, including amanita species, which are poisonous to humans. They occasionally prey on birds’ eggs and young and baby rabbits and mice. Nesting Males and females mate following dizzying courtship chases. The female is receptive for only one day. The nest–lined with shredded bark, grasses, and leaves–is usually built in a tree cavity. Leaf nests or hollow logs are also used. After a gestation of 35 to 38 days, the female gives birth to three to seven blind, hairless 1Ú4-ounce babies. Males don’t rear the young. Mortality is high; only 25 percent survive their first year, when they reach sexual maturity. Life expectancy is five or six years.

I am only posting these snapshots because I found it rather unusual for the feisty Red Squirrel to share food space with a black form Eastern Grey Squirrel. The red will typically chase off the grey squirrel, but these two sat and ate together for quite some time in harmony. This particular black squirrel was very shy and normally stayed in the deep part of the woods so it was unusual for it to even be within view. I had to hide along the corner of the cabin in order to sneak shots of them.