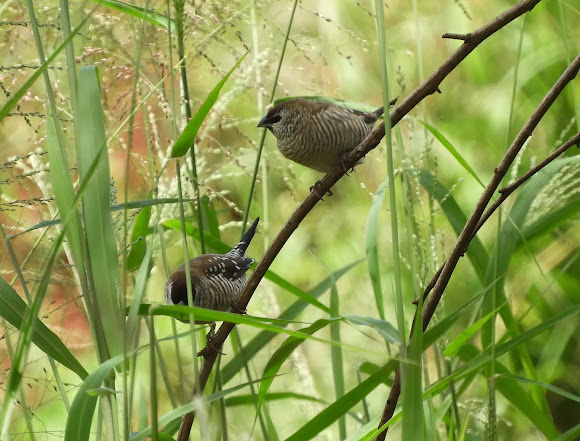 I saw this small flock mingling with the Chestnut-breasted Mannikins and also on there own. The tinkling whistle pyiiit, the soft tlip and the high pitched chirping and gargling trills were very distinct. Was a very pleasant encounter. Also noticed that these finches were much shyer than the C-b Mannikins, so I was very delighted to get any photos. These birds need to drink almost every hour, which means that they must have water nearby. They are quite nomadic, making it difficult to estimate their numbers. Their movements can turn into erratic irruptions, meaning that they may appear in numbers in places where they've not been seen for quite some time and then again disappearing just a quickly. Watching them foraging throughout the grasses showed how skilful they are as they seek out the part-ripe or ripe seeds. Reference of Reader's Digest Complete Book of Australian Birds.

Beautiful spotting. Some of these photos have a magical dreamlike quality about them.