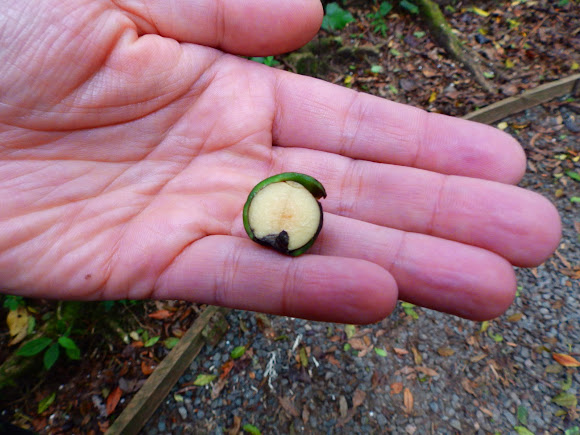 May not be the most graceful spotting but is shown because these are little berries called aguacatillos (spanish for "small avocados"). These are berries from trees of the genus Persea, which are relatives of the avocado (P. americana). Quetzals and trogons among other Central American birds rely on these berries for the most of their diet. For such reason loss of habitat for Persea means loss of habitat for the quetzals! As you can see, most of the berry in the central part is the non-edible seed and as a difference from the avocados we eat, these aguacatillos have little flesh on them so that the birds rely on eating many to survive. (Wiki: The fruit is an oval or pear-shaped drupe, with a fleshy outer covering surrounding the single seed; size is very variable between the species, from 1–1.5 cm (0.39–0.59 inches) in e.g. P. borbonia and P. indica, up to 10–20 cm (3.94–7.87 inches) in P. americana.) Efforts are being made in several forests of Costa Rica to replant trees of the Persea genus bearing the berries that feed all these special birds. This has brought succes in recovering the once declining populations of quetzals. However, bad years can happen when the dry season is too dry and then the trees do not bear berries. This endangers the survival of the birds and their nestlings.