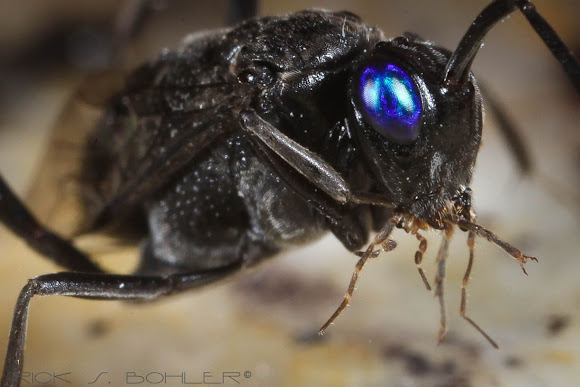 The Ensign Wasp looks a bit like a black spider with wings. Many people on seeing one might assume that it could sting but in fact it is totally harmless. The Ensign Wasp is actually a beneficial insect because it is a parasite of cockroaches and hunts for their egg-cases of cockroaches, which are known as oothecae. The female wasps lay their eggs in them and the wasp larvae eat the eggs of the cockroach.

Adult wasps, which are about 1/4 to 3/4 inch long, can be found feeding on the nectar of flowers and on honeydew that aphids have deposited on leaves, as well as hunting for cockroach egg-cases.

Ensign Wasps are in the family Evaniidae, and get their name because they move the abdomen part of their bodies up and down as if they are signalling with a flag. They are also known as Hatchet Wasps. Besides living in Tenerife and the Canary Islands, they are also found in America, Canada and many other parts of the world. They have followed where cockroaches have gone and this is a good thing for us because the wasps prey on the cockroaches which we regard as a harmful insect pest.. The larva of an Ensign Wasp eats all the eggs it finds in an ootheca and then pupates inside the egg-case. Adult female Ensign Wasps often come into houses searching for oothecae of the cockroaches that lay them. Unfortunately, many people kill them thinking they are harmful pests when the truth is the opposite of this. So if you see one don't destroy the insect but either leave it alone or put it outside. It may not look like it but it is an insect that can be helpful to us!

I had no idea it had blue eyes until I started shooting it. It just looked like a black bug :)

Never saw one before with blue eyes! How big was this one?