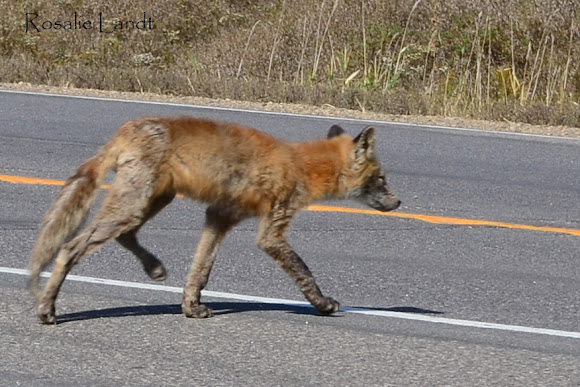 The red fox is common across Minnesota, even in the Twin Cities and suburbs. This reddish-colored animal is a cousin to the dog. Foxes live in ground dens or brush piles and are particularly active at night. Identification General description: This is a medium-sized predator (meat eater) often seen running quickly across fields or through woods. Size: The average size of an adult fox is 15 to 16 inches tall at the shoulder. It is about 3 feet in length, with a 13-inch tail. Weight: Between 8 and 15 pounds. Color: Well-known for its rusty-red coat, white-tipped bushy tail, and black legs, ears and nose. In Minnesota, there are several different color variations including nearly solid black, silver-black and red bisected by dark bands across the back and shoulders (called a cross fox). Sounds: Red foxes bark much like dogs, and will sometimes scream when alarmed.

Habitat and range Red foxes live throughout Minnesota in many types of habitat, ranging from mature forest to open fields. They range over about two square miles, depending on how far they need to travel to find food. Red fox tend to be solitary animals, and always hunt alone. The fox may be active day and night but appears to hunt most during twilight and evening.

While most will photograph only the most beautiful or perfect specimens, I chose to document this rather old and obviously sick Red Fox. This fox moved very slowly, in broad daylight across a busy highway just west of the city of Minneapolis. A country setting but a busy road. He/she moved with lameness, but with determination and a purpose. He stopped to shake on the center of the road without stopping. Though his fur is matted, dirty and he was lame, I still think this was a beautiful creature worth photographing.

Good observation Rick and you're right. He walked in a somewhat hopping fashion with his rear legs like he was very stiff and arthritic. His feet look a bit swollen too. Thanks, it's sometimes nice to put a little story with the series if it makes sense to. :)

Looks like it's left foot never touches the ground....GREAT info and shots Rosalie

Yes, that and I think he was just very old. He moved very slowly and his right eye was not wide open; I didn't see his left side or left eye.