The Hen Harrier or Northern Harrier (in the Americas) 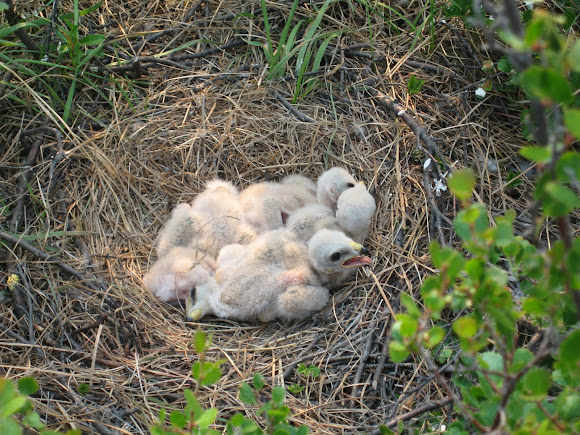 The Hen Harrier is 41–52 cm (16–20 in)[3] long with a 97–122 cm (38–48 in) wingspan.[4][5] It resembles other harriers in having distinct male and female plumages. The sexes also differ in weight, with males weighing 290 to 400 g (10 to 14 oz), with an average of 350 g (12 oz), and females weighing 390 to 750 g (14 to 26 oz), with an average of 530 g (19 oz).[2][5] Among standard measurements, the wing chord is 32.8 to 40.6 cm (12.9 to 16.0 in), the tail is 19.3 to 25.8 cm (7.6 to 10.2 in) and the tarsus is 7.1 to 8.9 cm (2.8 to 3.5 in).[5] It is relatively long winged and long tailed, having the longest wing and tail relative to its body size of any raptor occurring in North America.[5] The male of the nominate race, C. c. cyaneus (Linnaeus, 1766), which breeds in Europe and Asia, is mainly grey above and white below except for the upper breast, which is grey like the upperparts, and the rump, which is white; the wings are grey with black wingtips. The female is brown above with white upper tail coverts, hence females, and the similar juveniles, are often called "ringtails". Their underparts are buff streaked with brown.[2] The race C. c. hudsonius (Linnaeus, 1766) breeds in North America and is sometimes considered a distinct species, C. hudsonius.[6] The male's plumage is darker grey than that of C. c. cyaneus and the female is also darker and more rufous.[2] In both North American and Eurasia, the adult male is sometimes nicknamed the "Grey Ghost", because of his striking plumage and spectral aura. The female gives a whistled piih-eh when receiving food from the male, and her alarm call is chit-it-it-it-it-et-it. The male calls chek-chek-chek, with a more bouncing chuk-uk-uk-uk during his display flight.

It migrates to more southerly areas in winter. Eurasian birds move to southern Europe and southern temperate Asia, and American breeders to the southernmost USA, Mexico, and Central America. In the mildest regions, such as France, Great Britain, and the southern US, Hen Harriers may be present all year, but the higher ground is largely deserted in winter.

I Accidently walked up on these chicks on the ground amongst shrub birch.