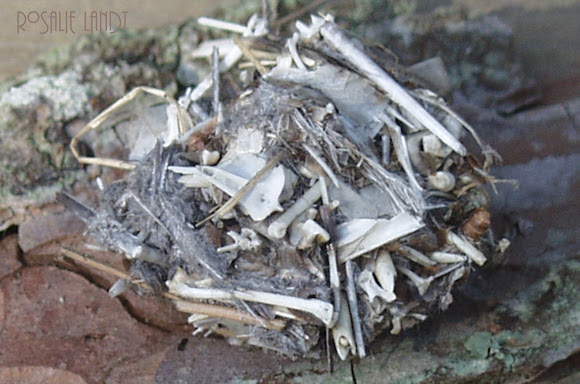 A pellet, in ornithology, is the mass of undigested parts of a bird's food that some bird species occasionally regurgitate. The contents of a bird's pellet depend on its diet, but can include the exoskeletons of insects, indigestible plant matter, bones, fur, feathers, bills, claws, and teeth. In falconry, the pellet is called a casting. The passing of pellets allows a bird to remove indigestible material from its proventriculus, or glandular stomach. In birds of prey, the regurgitation of pellets serves the bird's health in another way, by "scouring" parts of the digestive tract, including the gullet. Pellets are formed within six to ten hours of a meal in the bird's gizzard (muscular stomach). Ornithologists may collect one species' pellets over time to analyze the seasonal variation in its eating habits. One advantage of collecting pellets is that it allows for the determination of diet without the killing and dissection of the bird. Pellets are found in different locations, depending on the species. In general, roosting and nesting sites are good places to look: for most hawks and owls, under coniferous trees; for Barn Owls, at the bases of cliffs or in barns and silos; for yet other species of owls, at their burrows or in marsh and field grasses.[1]

Ornithologists examining pellets have discovered unusual items in them—even bird bands that were once attached to a smaller species that was consumed by the predator bird. In the United States, screech owl pellets have contained bands from a Tufted Titmouse, Black-capped Chickadee, and American Goldfinch. In 1966, a Golden Eagle pellet in Oregon was found to contain a band placed on an American Wigeon four months earlier, and 1,600 km (990 mi) away in southern California.[1] The hair, bones and other body parts (such as limbs, skin fragments, and even faeces) of rodents found in owl pellets may carry viable rodent viruses and bacteria. It is therefore advisable to sterilize pellets in a microwave oven before study. This is particularly important when using pellets at school. Recently, Smith et al described two pellet-borne outbreaks of Salmonella typhimurium in public schools.[2] Not surprisingly, rodents tend to avoid owl pellets, apparently due to their infective potential.[3]

I found this pellet in the woods near Park Rapids, MN. I do not know which type of owl it is from; it appears smaller than Great Horned Owl pellets I have found and dissected, but this could be a partial pellet as well.

Thanks Ava T-B. I think I clicked on this mission in error as I also have it in the Signs of Wildlife. I removed it from the nests,hives mission.

Hi RosalieLandt, This doesn't really belong in Nests, hives, bowers...etc mission, but it is perfect for the Signs of Wildlife mission at http://www.projectnoah.org/missions/7208...