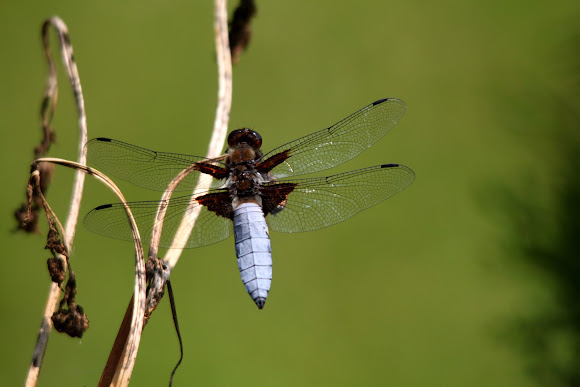 The male and female have a broad, flattened abdomen which is brown with yellow patches down the sides. In the male the abdomen develops a blue pruinosity that covers the brown colour. Both fore and hind wings have a dark patch at the base. Both the male and female have broad antehumeral stripes. The average wingspan is approximately 70 mm. L. depressa is very distinctive and should not be confused with any other dragonflies in the region.

L. depressa is found in central and southern Europe, central Asia and the Middle East. It range extends northwards to southern Scotland, southern Sweden and southern Finland and it occurs on some Mediterranean islands including Corsica, Sardinia, Sicily, and Menorca. Its range does not extend beyond southern Europe into Africa. L. depressa is seen near still-water lakes and ponds, feeding on many types of small insects. They occur in both bare and sunny locations, where it is often the first dragonfly to colonise new habitats such as newly created ponds, and well vegetated ponds. L. depressa are often seen away from water as the adults are very mobile and undergo a period of maturation away from water after emergence. The adults are also migratory.

Thank you very much for the comment Debbie, you are right, the last picture is a four spotted chaser!

Nice spotting Marc! The last dragonfly looks more like a four spotted chaser to me as I'm pretty sure thats the only one to have orange on its wings which the ones in the other two photos don't have, also note the four smaller spots in between the outer ones which again the first two don't have :-)