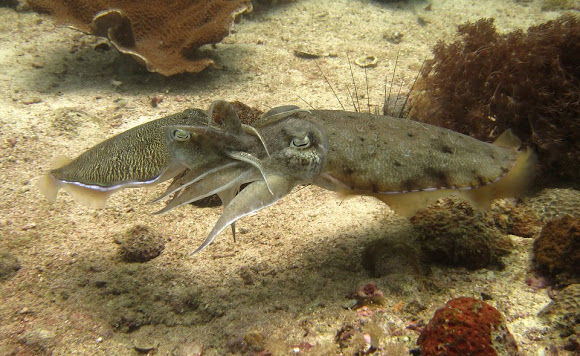 The pharaoh cuttlefish (Sepia pharaonis) is a large cuttlefish species, growing to 42 cm in mantle length and 5 kg in weight. When raised in the laboratory, the maximum recorded size for males is 16.2 cm, and for females 15.5 cm. Sepia pharaonis is likely a complex of at least three species, the distributions of which are not well understood.

Pic #1 shows a pair of Cuttlefish mating. Pic #2 shows the Male 'protecting' his Female and nearby is another Male waiting for the opportunity to mate with the Female. When Cuttlefish are in mating season, it is common to see more than 1 Male courting a Female and several Males lingering around waiting for an opportunity to sneak in for a quickie. Sometimes, the second or other Males will flash colors on one half of his body facing the Main Male, imitating the colors of a Female. This is an approach to show the Main Male that he is not 'competition' for the Female.