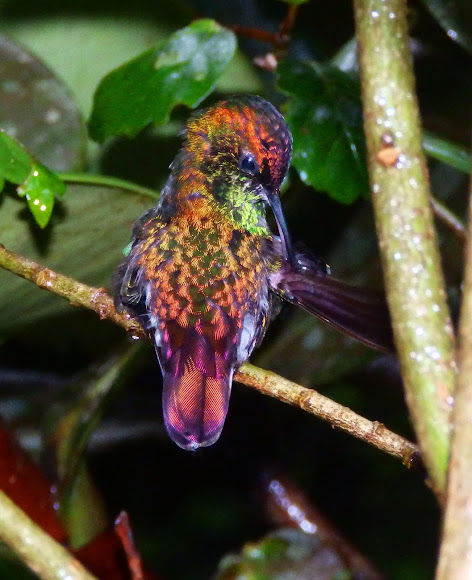 Is a small hummingbird endemic to Costa Rica. It measures a mere 3 in (7.6 cm) in length, and weighs only 3 g (0.11 oz).[2] The male has distinctive coppery crown and rump with a whole green belly and white vent. The female has a white belly and a narrow black subterminal band on white outer rectrices of the tail. Its noticeably decurved bill sets it apart from similar the allopatric White-tailed Emerald.

What a great spotting

Sure they did, Leuba. The colors also variate with the light. They look at times green o coppery depending on the light :-)

Beautiful capture Marta,awesome collours,congrats on the SOTD and thanks for sharing

Once again, thank you for all the nice messages! I hope I am right with the ID since I was not 100 % sure but the hummie really looks coppery so.. :-)

Such a marvelous spotting :)

Amazing! Congrats on the SOTD!

Congratulations on the SOTD, Marta RubioTexeira.
Fantastic picture of a little Jewel. Looks like you are enjoying Costa Rica. Welcome and Pura Vida!!

Gorgeous Marta! Congrats on the SOTD!

Many thanks to all people who has liked this spotting and for being chosen SOTD! In Costa Rica you can only find one beauty after another, that I can say after seeing so many beautiful species there :-)