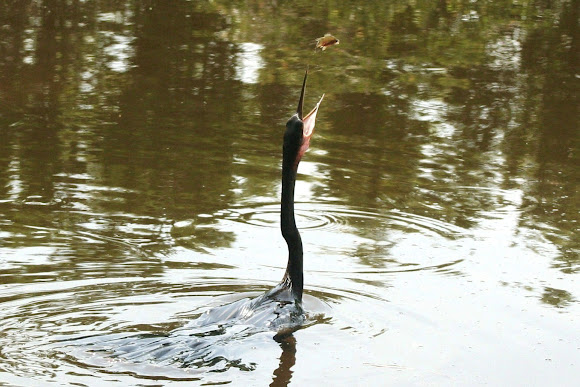 The Anhinga (Anhinga anhinga), sometimes called Snakebird, Darter, American Darter, or Water Turkey, is a water bird of the warmer parts of the Americas. The word anhinga comes from the Brazilian Tupi language and means devil bird or snake bird. It is a cormorant-like bird with an average body length of 85 cm (33 in), a wingspan of 117 cm (46 in), and a mass of up to 1.35 kg (3.0 lb). It is a dark-plumaged piscivore with a very long neck, and often swims with only the neck above water. When swimming in this style the name Snakebird is apparent, since only the colored neck appears above water the bird looks like a snake ready to strike. They do not have external nares (nostrils) and breathe solely through their epiglottis. The Anhinga is placed in the darter family, Anhingidae, and is closely related to Indian (Anhinga melanogaster), African (A. rufa), and Australian (A. novaehollandiae) Darters. Like other darters, the Anhinga hunts by spearing fishes and other small prey using its sharp, slender beak.

Anhinga species are found all over the world in warm shallow waters.[2] The American Anhinga has been subdivided into two subspecies, A. a. anhinga and A. a. leucogaster, based on their location. A. a. anhinga can be found mainly east of the Andes in South America and also the islands of Trinidad and Tobago. A. a. leucogaster can be found in the southern United States, Mexico, Cuba, and Grenada.[3] Only birds that do not live in the extreme north and south of their range migrate and do so based on temperature and available sunlight. Anhingas will migrate towards the equator during winter but this range is "determined by the amount of sunshine to warm the chilled birds".[2] Although not in their usual range, anhingas have been found as far north as the states of Pennsylvania[4] and Wisconsin[5] in the United States. Kettles of anhingas often migrate with other birds and have been described as resembling black paper gliders

Unlike ducks, the Anhinga is not able to waterproof its feathers using oil produced by the uropygial gland. Consequently, feathers can become waterlogged, making the bird barely buoyant. However, this allows it to dive easily and search for underwater prey, such as fish and amphibians. It can stay down for significant periods. When necessary, the Anhinga will dry out its wings and feathers, with the resemblance of the semicircular full-spread shape of its group of tail feathers while drying them out, to that of true meleagrine males lending the name "water turkey" to it. It will perch for long periods with its wings spread to allow the drying process, as do cormorants. If it attempts to fly while its wings are wet, it has great difficulty getting off the water and takes off by flapping vigorously while "running" on the water.